Our housing system is broken. We need to start again

It is time for a housing commission. We cannot just let a dysfunctional system get ever worse 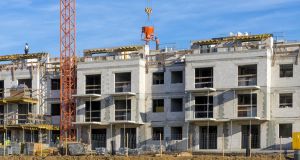 Nobody ever sat down and planned our housing system. It is the outcome of a century of incremental changes. Some of these arose from policy decisions, others from the evolution of custom and practice.

Evolutionary change can work well. But sometimes we see such profound changes to our environment that we need a deeper and more thought-out response in order to overcome a systemic crisis.

This is one of those times. The Government’s housing policy Rebuilding Ireland was the beginning of such a response, but given the extent and depth of the revisions needed to our thinking, our legislation and our practice, it can only be seen as a beginning.

We sell council houses to tenants, we don’t replace them, and then we wonder about the scarcity of social houses

Our system now has multiple contradictions:

We need now to untangle all these contradictions and produce a housing system designed to deliver for everyone. Other countries have done it. We need to do it too.

The Irish housing system was not always dysfunctional. Arguably it functioned most effectively in the late 1950s and early 1960s. Back then there was a clear government housing policy. It encouraged owner occupation and made it affordable through grants and subsidies, including tax concessions to depositors in building societies. It also provided enough new council housing to meet the real needs of those who could not afford to house themselves.

But that policy was costly for the State – in tax forgone in mortgage-interest relief, on rates relief, on new council builds and in cash grants to new homes. It also soaked up most of the available State capital that could have been used to fund new health, transport and educational infrastructure – as was happening in the United Kingdom and elsewhere in Europe.

That approach to housing policy had changed by the 1990s as available State capital was redirected to non-housing investment – to new schools, hospitals and roads. Housing then dropped to become a lower political priority than other social investment. The decision to slash investment in housing left the country deeply exposed to a housing crisis once the economic crisis hit.

No new policy had been introduced to provide social housing during the boom. It was then that a real debate should have taken place to develop a new, coherent housing policy.

Instead we tried to muddle through with ad-hoc sticking-plaster decisions – and this is the direct cause of our housing issues today, with more than 10,000 people homeless, and many more in housing distress.

We could have selected a clear, affordable housing policy similar to those in many other European countries, such as the Netherlands, Austria and Scandinavia.

We didn’t. Ours is now a dysfunctional system both for market housing and for social housing. For market housing there’s no land-and-infrastructure management system funded to ensure a supply of shovel-ready housing land throughout the economic cycle in the locations of need. The failure to have shovel-ready sites in volume at the start of a recovery cycle is a major reason for high house prices and scarcity. Housing supply cannot be switched on like a water tap.

The stop-go approach that has beset Irish housing means that planning is led by developers and not by need. On the money side, mortgage finance is left entirely to market forces and again is stop-go. The price of new housing is driven by development costs, with the cost of new starter housing being unaffordable due to taxation, infrastructure, shortage of construction capacity and regulatory requirements that heavily affect viability.

The rent tenants are charged for social housing is insufficient to manage or maintain that stock. The average social-housing rent is about €200 a month in Ireland; in comparable countries it would be between €600 and €800. Uniquely, Ireland generally charges below market rents even to tenants who have the ability to pay a viable rent.

To make matters worse, the number of private landlords has fallen by 20 per cent in seven years, at a time when the need for rental housing has risen dramatically. This decline in supply is at least in part linked to a taxation regime for landlords that is significantly less generous than for other forms of property income, or indeed for other forms of self-employment. This in turn aggravates scarcity and has driven more unaffordable rents.

The visionary choice is to get all the stakeholders around a table for as long as it takes to thrash out a viable, executable policy

The dysfunction could be ended. But it would require a huge policy shift. It would require politicians and experts to sit down together and agree a long-term vision for housing in Ireland. It would require decisions that were less vulnerable to capricious decisionmaking for short-term political advantage. Housing systems that work require political discipline, because they involve hard choices on matters such as personal taxation, investment in infrastructure, and urban-planning decisions linked to real transportation and settlement policies.

Is Ireland ready for this kind of approach to modern housing policy? Or must we just muddle on and watch our dysfunctional housing system become even more dysfunctional? That is the choice.

The visionary choice is to get all the stakeholders around a table for as long as it takes to thrash out a viable, executable policy. The way to do this would be to set up a housing commission, representing all political, administrative and academic viewpoints, to sift out the good from the bad and agree a way forward that delivered sustainable, long-term outcomes.

That body would commission research, consult users and providers, examine our legacy issues and consider alternative viable housing systems in other countries, all with the objective of creating a world-class housing system that would serve multiple future generations.

1 Revealed: Ireland’s favourite takeaway and favourite takeaway dish
2 Taoiseach claims Sinn Féin not ‘a normal political party’
3 Who are Ireland’s 17 billionaires?
4 52 places to go in 2020: Here’s where the New York Times says you should visit
5 Yacht captain guilty of drunk sailing had ‘God given right’ to be on Liffey
Real news has value SUBSCRIBE