The Irish Times view on the Decade of Centenaries: The act of remembering 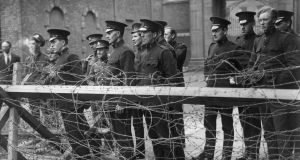 Members of the Black and Tans and British army privates watch fighting during the siege of the Four Courts in Dublin in June 1922. Photograph: Topical Press Agency/Getty Images

The decision of the Government to hold a formal State event as part of the Decade of Centenaries to remember the policemen who served in the Royal Irish Constabulary (RIC) and the Dublin Metropolitan Police (DMP) is to be welcomed. More than 500 policemen were killed in the period 1916 to 1922 and it is time this was properly acknowledged.

Remembering the RIC and the DMP does not imply approval of those who ran or controlled those police forces. Nor does it justify all the actions taken by individual policemen during that traumatic period in our history. It is simply an acknowledgment of the tens of thousands of Irishmen who served in the police forces that existed before the foundation of the State.

There is a distinction between commemoration and celebration. The Irish men who fought in the British army in the Great War have in recent years been properly acknowledged and remembered after many decades of neglect. The British soldiers who died in the 1916 Rising were even remembered as part of the centenary commemorations four years ago.

A group of retired gardaí have been campaigning since 2012 for a memorial to the members of the RIC and DMP who died in the line of duty. It is largely due to their efforts that Minister for Justice Charlie Flanagan came to the view that it is now time for an official commemorative event.

While there will inevitably be some objections it is only right that the State should acknowledge the contribution made by Irish policemen who found themselves caught up in violent events not of their making.

The next phase of commemorative events, including those to mark the War of Independence in Cork and the establishment of Northern Ireland, have just been announced. The popular success of the project has been due in large measure to its inclusivity. It is only right that in commemorating the past in all its complexity we should not forget the policemen who served the community to the best of their ability, particularly those who died in the attempt.