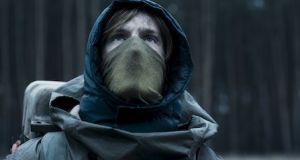 Dark: Even though the series is set in a town, everybody walks, runs or drives through the forest at least twice a day.

The holidays are a time for good cheer and binge-watching Netflix series, although sometimes the two are not connected. No one, for example, ever felt cheerier after binge-watching Dark, the cult hit German series that has been compared to Stranger Things.

Let us be clear, it bears no resemblance whatsoever to Stranger Things. There are moments of giggly light relief in Stranger Things and some loveably goofy characters. No one in Dark has ever voluntarily smiled or caused another to smile.

One of the good things about binge-watching is that I now feel qualified to comment on German culture and the differences between it and Ireland. (Sort of the same confidence that inspires Americans that they know everything about Irish culture having watched The Quiet Man.)

There are no spoilers in what follows. You will have to get your own dose of mind-melting timelines, first-class small-screen production values and Teutonic grimness for yourself if you want to find out what Dark is about.

The first cultural difference is that there are no pubs in Winden, the small town in which Dark is set. The only time that Germans drink alcohol is at parties, where they swig from the neck of the bottle of champagne that they then serve to their guests. So, while the latter part is just like Ireland, all those beer gardens and beer halls we keep hearing about are clearly myths invented to inveigle Irish tourists into visiting.

Even though the series is set in a town, everybody, and I mean everybody, walks, runs or drives through the forest at least twice a day, sometimes more. They often head out into the forest in the dead of night. In Ireland, this would be considered very eccentric behaviour. In addition, German children merrily walk home from school on their own through the forest. Everybody knows that it is extremely unhealthy for Irish children to walk anywhere, especially to or from school, never mind through forests.

In Germany, the correct response to someone who has just given you Earth-shattering news is a thousand-yard stare. This is particularly true when the news is something that you have wanted to hear for decades. Never, ever ask a supplementary question. It is unGermanic.

Obviously, Irish people would suffocate if they could not ask supplementary questions, all carefully angled so as to extract maximum information while revealing as little as possible about themselves. Only Irish amateurs ask you what you had for your breakfast. A full calorie count and run-down on which exact pig was slaughtered for the sausages is more the Irish style.

Although Winden is big enough to have a primary school and a secondary school, there are really only four families that matter. And their lives are hopelessly intertwined. Again, pretty Irish.

Speaking of only four families, not only does everyone know everyone, they are all related to each other. But it’s none of your Aunt Brenda married my Uncle Jimmy stuff. Put it this way, the song I’m My Own Grandpa might not have been written by a German but it should have been.

Perhaps it is because of all that complicated genealogical entwinement (or other reasons I cannot divulge) but German teenagers have raised surliness to an art form. In contrast, Irish teenagers are models of sunny winsomeness.

Another point of difference is that school plays are very Germanic, full of long, grim speeches and mythological references and people dressed in costumes with feathers. Ah, Janey, you would never get anyone to pay in to see that in Ireland, not even parents. The musical is your only man in the Irish school. Forget the portentous sentences and give those golden oldies a spin and they will be dancing in the aisles.

Everyone in Germany lives in wooden houses – and if they don’t, they have to cover the interior in dark wood panelling

Everyone in Germany lives in wooden houses – and if they don’t, they have to cover the interior in dark wood panelling anyway. Having blond wood in your home is obviously an offence. If the house is pretty, it is particularly essential that you paint it in dark, forbidding colours. People in Winden have shares in a peculiar shade of teal blue paint that is almost black. They paint every interior in this colour and then buy bedding to match.

No one in Ireland lives in a wooden house.

If you are not yet rushing to the box to watch Dark, which is hypnotic, haunting viewing, I must have accidentally left something out. Happy New Year.

1 Harry and Meghan will no longer be working members of British royal family
2 Netflix: The best 101 films to watch right now
3 Chris Hadfield on the climate crisis: ‘The world has seen much, much worse’
4 Terry Gilliam: ‘Adam Driver is either an idiot or the last pure-hearted person out there’
5 Paul Flynn: Three of my family’s favourite dinners
Real news has value SUBSCRIBE