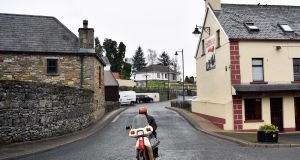 A motorcyclist in Pettigo, Co Donegal. For urban dwellers accustomed to a Dublin Bus/Luas/Dart stop down the street, it must be hard to understand the head-melting time, effort and frustration involved in relying on rural public transport. Photograph: Neil Hall/EPA

Was there a halcyon era when someone could throw an idea out there and assume that people would engage with it as just, you know, an idea? An ill-considered idea perhaps, but one put out there in good faith?

Eamon Ryan has earned the presumption of good faith. Some might wish Greta Thunberg and the regiments of weeping children would stop catastrophising and blaming us for leaving them all to die in their billions in six months yet no one can deny the science. Had we listened to Ryan and the Greens down the decades, we might now be able to look Greta and our children in the eye.

It’s also true that reintroducing wolves – another of Ryan’s ideas – would hardly be conducive to a relaxing family day out in the Slieve Blooms but the persistent sneering about it has the air of a self-justifying climate-denying smokescreen.

Ryan’s car-sharing idea – a rural village of 300 sharing 30 communal cars – comes from the blindingly obvious need to cut down car usage. So imagine a nice, organised, compact village about say, 10-15km from the nearest big town, where you amble to the car and drive yourself to the big town to do the weekly shopping, have a meeting, splurge on a nice coffee and save thousands by sharing the car costs (the AA estimates the cost of car ownership at about €11,000 a year). Win win.

As someone living those crucial kilometres from the nearest public transport in north Kildare and who dreams of dispensing with the car, I would like to inspect these mythical villagers.

For urban dwellers, it must be hard to understand the head-melting time, effort and frustration involved in relying on rural public transport

Do they all live within a baby buggy walk of the car park? Do any of them have messy child deliveries to multiple schools and a subsequent dash to work in Blanchardstown or Tallaght?

Will they be racing back for school/creche collections later, collecting the spouse from the train (10-15km away), fitting in a medical appointment or disability services for a child or grandparent en route, a school emergency, a prescription that needs to be picked up or a box of fresh vegetables, a late night at the office or a spontaneous five-a-side?

Forget those family complications for a moment. Assume the dawn-risers haven’t snapped up all 30 cars (remember, very few work locally), and a villager takes one to get to the railway station. Without a car-docking system (like Dublinbikes stations), the car will sit there all day like any old private car. But with a car-docking system, how can she be sure there will be a car for her when she gets back?

For urban dwellers accustomed to a Dublin Bus/Luas/Dart stop down the street, it must be hard to understand the head-melting time, effort and frustration involved in relying on rural public transport.

The Cahersiveen car-pooling initiative (a different creature to Ryan’s car-sharing idea, though conflated with it in this debate) has also been wheeled out to show what is possible in a proactive community. And true enough, the site is a warm hive of offers and requests. Yet one subscriber, clearly angered by the village car proposal, warns politicians not to ride on initiatives such as theirs: “Not everyone gets the lift they require . . . Come live where I do and depend on a carpool.”

The real problem with Ryan’s idea is that it tapped into a particular nerve among rural citizens, a perception of entitlement and lack of empathy among bubble-living, city dwellers.

Many Irish citizens already have to orientate themselves towards a capital to which all roads gravitate, a city that has made itself the national hub of everything – government, employment, transport, culture, centres of medical excellence. Yet even along well-served Dublin Bus routes, cars pack the streets and driveways. How many are used to compensate for poor transport links even within the city? How many of these city cars are really necessary?

When I last wrote about rural transport and the cost of running a car, the mainly scathing “advice” from commenters was to move to the city and get a bike.

“Nobody put a gun to your head and forced you to live 24km from Dublin in an area with no public transport facilities”, lectured one omniscient city boy.

“It was your choice to move there, presumably to avail of a larger house at lower cost . . . If you can’t afford to buy a suitable property in a convenient area, then rent one.”

Part of the answer is that this had been my cycling husband’s home for more than 50 years and serious illness had struck the household. Sooner or later it comes for us all, omniscient city boy. But that’s not the point.

Representative or not, city boy’s is the voice that pings around the heads of many citizens living outside the Dublin Bus-Luas-Dart axis when “solutions” are put out there.

The answer to a lot of car dependence, as we’ve known for aeons, is an equitable, well-funded, frequent, efficient, public transport network throughout rural Ireland, the kind that gets you past that first 10-15 kilometres to the network.

Last April, the Dáil was told about the Swiss region where villages meeting the threshold of 300 residents, jobs or educational places are guaranteed hourly transport links to the overall public transport network.

The speaker was Ryan. He also noted that the annual cost of congestion in the Greater Dublin Area was estimated at €358 million and rising.

That would fund a lot of country buses, city boy, and get a lot of cars off the roads.