What Boris Johnson really wants out of Brexit 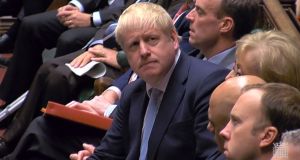 British prime minister Boris Johnson seems to believe that Britain can prosper in the wider world only if it breaks all ties with Europe. Photograph: UK Parliamentary Recording Unit/EPA

It is hard to identify precisely the point at which cynical opportunism meets whimsical nostalgia. There are large measures of both in Boris Johnson’s drive for Britain’s departure from the EU. Let’s get Brexit done, the prime minister never tires of saying as he bangs the drum of English nationalism. This is nonsense. Britain will be getting Brexit “done” for years, perhaps for a decade, beyond the day of leaving.

Start with the cynicism. It has been obvious since Johnson crossed the threshold of 10 Downing Street in July that the negotiations with Brussels were to be guided by a new purpose. Declaring Britain’s scheduled leaving date of October 31st to be an inviolable deadline had the same aim. The new goal was to keep Johnson in office. Forget about reaching an understanding with the EU that best served the national interest.

Johnson knew he faced an early election. As long as Britain remains in the EU, the Conservatives can be outflanked on the anti-European right by Nigel Farage’s Brexit party. The fear was that Farage would win over enough traditionally Tory voters to deny the party a majority. So a deadline had to be fixed to change the political calculus.

The prime minister says he would prefer to negotiate a deal than see Britain crash out. His actions suggest otherwise. When he took office he was briefed by senior officials that demanding the removal of the so-called Northern Ireland backstop from the agreement signed by his predecessor, Theresa May, was a sure route to deadlock. The Dublin Government and the rest of the EU would not abandon the guarantee of an open border between the North and the Republic.

The officials could be certain of this because May had tried and failed to sell to the EU27 every conceivable alternative. Johnson dismissed that advice, and insisted on an alternative to the backstop that would allow Northern Ireland as well as the rest of Britain to leave the EU customs union.

The plan now submitted to Brussels is a stitching together of various ideas floated by May and rejected by the EU. Absurdly, it now suggests two borders – one on the island of Ireland itself and another in the Irish Sea. The key proposal is the restoration of customs checks between North and South, albeit not on the frontier itself. This ditches the formal accord signed by May with the EU27 in 2017 and, if implemented, would grievously undermine the Belfast peace agreement.

Advanced technology may make such a border less visible, but this is to miss the point. The guarantee in the peace settlement was not directed at economic efficiency or bureaucratic convenience. It was designed to underpin mutual respect for the identities of the two communities in Northern Ireland. An open border allows unionists to assert allegiance to the UK while nationalists can embrace an Irish identity.

In the circumstances, Michel Barnier, the EU’s lead negotiator, can be forgiven for concluding that Johnson’s plan is a cynical feint on the way to a no-deal departure. The prime minister is looking for an excuse to blame the “foreigners” for the breakdown of talks. A sensible response would be for the European Commission to show itself willing to examine his plan before asking Johnson to come up with something serious.

One other possibility is that the prime minister thinks he can put his Irish counterpart, Leo Varadkar, into a corner. Faced with the dire consequences for the Republic of a disorderly Brexit, Varadkar might throw in his hand. If Dublin gave ground, Brussels would fall into line. Some would call this blackmail. My view is that it is anyway a miscalculation. The Republic will not surrender its long-term interests to avoid short-term economic disruption.

Vitally important as it is, there is more to Brexit than the arrangement for the Irish border. May was proposing a hard Brexit, one that would see Britain outside not only the single market and customs unions, but also beyond most of the other institutions and programmes – political and well as economic – of the EU. Johnson wants to go further. He has been rewriting the political statement in which the two sides set out their aspirations for a post-Brexit relationship.

The aim is to remove the few mutual commitments to a unique relationship that remained in May’s text. By the account of some Whitehall insiders, Johnson envisages an ultra-hard Brexit that would leave Britain further from the EU than are many other third countries. He seems to believe that Britain can prosper in the wider world only if it breaks all ties with Europe.

Here the nostalgic delusions set in. Britain will rediscover the energy and ambition of the first Elizabethan age; nations from every corner of the world will queue up to strike trade deals; foreign investors will flock to the UK carrying suitcases of cash. US president Donald Trump will offer the best trade deal ever?.?.?.? no, really. All that is required is that the nation closes its eyes and hurls itself over the cliff on October 31st.

Johnson says he will ignore the act of parliament that requires him to request an extension of the article 50 process if the alternative is a no-deal Brexit. My guess is that he is bluffing. Even if he is not, there are enough law-abiding members of the cabinet to force his hand. Given his record, however, no one can be sure. Johnson’s only real concern is to stay in office. Parliament must now prepare to remove him – whatever it takes. – Copyright the Financial Times Limited 2019

Philip Stephens is a columnist with the Financial Times