Kathy Sheridan: We are all Athena to Boris Johnson’s Heracles

Brexit mess, modern politics and the potential wisdom of myth

The suspension of British parliament descended into chaos as Labour MP Lloyd Russell-Moyle tried to block speaker John Bercow from leaving his chair to proceed with a ceremony that led to prorogation. 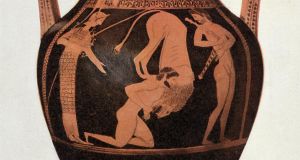 Ode to a Grecian urn: Heracles engages in the first of his 12 labours, helped by the goddess Athena, two characters referenced by Taoiseach Leo Varadkar in meeting Boris Johnson. Photograph: Hulton Archive/Getty

Of course, the Taoiseach’s offer to be the Irish Athena to Britain’s Heracles was misunderstood to begin with. The hot take was that when a maddened Heracles smashed the furniture and murdered his wife and eight children, Athena knocked him unconscious, preventing him from killing his stepfather. Which is true (in the mythological sense) but incomplete.

Left like that, our role as modern Athena would appear to be gratifyingly straightforward: knock out half the British electorate and tie them to a pillar before they do any further damage. But it probably wasn’t that part of Athena’s contribution the Taoiseach had in mind. When Heracles was sentenced to 12 labours to expunge his guilt and restore his reputation, Athena his half-sister, goddess of warfare and wisdom, harnessed her skills to help him complete them. Which is the point where we as Athena, step in to help the neighbour, presumably.

Still, there is the question as to whether she should have helped him at all. Heracles’s trouble started early when he failed to take account of his demigod strength – Eton will do that to a chap – and, frustrated at being unable to master the lyre, killed the tutor. Being the stepson of a powerful man, however, he was acquitted but the plain people were outraged, forcing him to flee. Rescued again, it wasn’t long before he was sufficiently restored to impregnate scores of women and return to his old ways – killing a prince here, his father-in-law’s cupbearer there and so on.

Writers of the time, enraptured by his masculine perfection, saw those breakouts as a rather lovely flaw. Just Heracles being Heracles, like. And naturally, a woman was to blame for driving him mad. Another view is that he could never settle for the simple life and liked to mix it up with outbursts of heroic carnage. One might conclude that Athena was merely enabling him and should have left him to his own devices. Then again, being family, she probably felt obliged to support him, even if the odd brother couldn’t handle the shame.

We have choices to make about this modern Heracles Johnson who came among us, hollow-eyed in his flapping, messy robes, trapped by hubris, maybe seeking salvation

So we have choices to make about this modern Heracles Johnson who came among us, hollow-eyed in his flapping, messy robes, trapped by hubris, seeking discreet salvation, possibly. A mortal man subject to bouts of shouting and red wine carnage, undone by decades of compulsive lying and careless destruction, a man who has no care for anything because he is spoilt (according to the latest woman in his life) and whose chief advisor is exposed as a disdainful, scorched-earth advocate with anger-management problems and the base campaigning instincts of Steve Bannon. A mortal man who has managed to lose more parliamentary votes in a week than Tony Blair did in 10 years.

He has developed odd tics, grimaces, fidgets and some strange horizontal arm-stretching moves, all on show while the Taoiseach offering to be his Athena (only under certain circumstances) was in courteous but firm flow outside Government Buildings. Johnson’s rhetoric has moved a notch or two since May 2016 when he suggested that one of the reasons EU democracy wasn’t working was that “there is simply no common political culture in Europe; no common media, no common sense of humour or satire; and – this is important – there is no awareness of each other’s politics”. There is now.

Now circumstances have forced him to talk about “statecraft” rather than dying in a ditch; to sound faintly conciliatory to a point that has the DUP looking hunted. In what social media call a piece of “top trolling”, a big Irishman once known as the enforcer has been confirmed as the EU’s lead trade negotiator with the UK. To cap it all, Johnson lost two further parliamentary votes the night of his Irish visit. But he was also able to shut down parliament for five weeks (allegedly by misleading the queen) in a jaw-dropping two-fingers gesture to at least half the country.

Circumstances have forced him to talk about 'statecraft' rather than dying in a ditch; to sound faintly conciliatory to a point that has the DUP looking hunted

Still, we are all Athena now, scripted to help save the career of this man who was the begetter of a law-breaking Brexit campaign and despite the tamer tone, keeps a catastrophic no-deal exit on the table. He claims he wants a deal but the forces that carried him to power say otherwise. And he will always lie.

What would Athena do? Equip him with clappers to scatter the scary birds (Macron, Barnier, Farage, Big Phil et al), help to restore some golden apples to their rightful place (atone for the immense damage incurred in money, welfare and sanity by his Brexit wheeze), escort him out of the underworld (help to save his reputation and career)?

It would hurt but may all be academic anyway. Astute observers are betting on him resigning before the EU summit in mid-October, leaving a caretaker PM to ask the EU for an extension, then playing the victim of EU and Irish intransigence before going on to campaign for a majority on wings of nationalist outrage.

Then again, Athena wasn’t perfect, according to historian Tom Holland. In fact, she was “spectacularly spiteful and vengeful towards those she fell out with so it probably cuts both ways”.

1 No obvious signs of injury on remains of McGinley children
2 Why our love for Leo is withering on the vine
3 Dancing with the Stars: Glenda Gilson sinks like Titanic
4 Fintan O’Toole: The terms of Brexit hold a great irony
5 Una Mullally: Those attacking Sinn Féin have become cheerleaders in reverse
Real news has value SUBSCRIBE