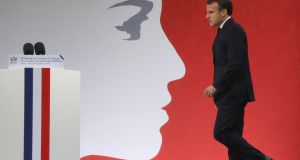 Stung by the gilets jaunes revolt, the continuing rise of the far-right and the persistent slur that his La République en Marche is a purely bourgeois party, the president has made immigration a theme of his autumn agenda. Photograph: Ludovic Marin/AFP via Getty Images

In approaching immigration, Emmanuel Macron need only look to his immediate predecessors in the Élysée Palace to see how not to do it. One of the keys to Nicolas Sarkozy’s 2007 election win was a dual strategy that won over the centre ground while filleting the far-right Front National, whose support fell to 10 per cent. In office, Sarkozy made no significant policy changes on immigration, but his rhetoric was hardline and he ramped up symbolic actions such as televised raids and expulsions of small groups of Roma. His cynical, opportunistic approach alienated everyone. In 2012, Marine Le Pen retrieved all the votes her party had lost to Sarkozy in 2007 and added a million new ones.

When he was campaigning for the presidency in 2012, Sarkozy’s successor, François Hollande sought to shield himself against attacks from the right by pledging to reduce inward flows and retain the ban on Islamic face veils while at the same time offering gestures to the left, including a plan to give resident foreigners a vote in local elections. But he was never tough enough for the right, and he failed to stand up and defend his vision of a welcoming immigration system. It was a failure that dogged his presidency.

Into this minefield steps Macron. Stung by the gilets jaunes revolt, the rise of the far-right and the persistent slur that his La République en Marche is a bourgeois party, the president has made immigration a theme of his autumn agenda. He is right in calling for a Europe-wide approach to asylum and to make the case for continental solidarity. It’s also entirely reasonable to insist that immigration rules be enforced. But some of his ideas for reducing the pull factor – reviewing family reunification, cutting the allowance for asylum seekers or limiting a medical aid scheme for the undocumented – risk making life much more difficult for vulnerable groups while legitimising some of the wilder claims of the far-right. So far, Macron has weighed his language carefully, speaking of a system that is both efficient and humane. His policy proposals should not sacrifice the latter in pursuit of the former.

1 Coronavirus: Everything you need to know about Covid-19
2 Shane Ross: ‘I lost a friendship with Mattie McGrath completely. He got totally personal’
3 Storm Jorge: Warning of power outages, fallen trees and flooding across Ireland
4 ‘F**king n***er.’ A racist incident on Bachelors Walk
5 Murder in a crowded house: The full story of the Patricia O’Connor trial
Real news has value SUBSCRIBE