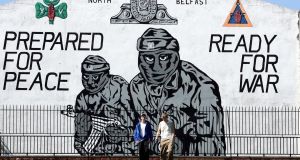 BBC NI has been running a series of Spotlight specials on the history of the past 50 years. Every episode brings new and unsettling evidence of what individuals and groups did. Yet no matter how many memories and impressions and reputations are challenged it remains the case that each side continues to champion their own. Photograph: Pacemaker

I listen to a lot of people muttering a variation of, “Well, if it wasn’t for all this Brexit stuff everything would be okay and we wouldn’t have the worsening divisions, growing demands for Irish unity and warnings about a return to the violence of the bad old days”.

That, of course, is nonsense. Most of the key issues which divided us before the Belfast Agreement remain unresolved, while 75 per cent of those who vote still do so for the orange and green parties; the demands for a border poll may be a little louder since 2016, but the nationalist parties would have continued the demands even without Brexit; and violence and threats of violence, even if low key, have remained part of our everyday fabric all the way through the peace/political process.

Brexit is obviously a new and complicated addition to the mix, but the real problem – which will still be there irrespective of a hard, soft or no-deal resolution – is our collective inability to deal with the past.

We seem incapable of leaving it behind, let alone learning anything from it. Most of us can recognise the entangling roots which keep us moored to it, but few have identified an escape route which might allow us to move forward.

There isn’t a day goes by without a politician, businessperson, church representative or civic leader warning us about the dangers of “returning to the past”; although, oddly – and it may explain the dilemma we are in – none of them acknowledges that we have never actually left the past.

We are cemented in it. Mostly still living our separate lives in our separate areas, separate schools, separate social groups, separate churches, separate political/constitutional communities and separate understandings of history. Indeed, so separate are we that, over 1,000 days since the Assembly last met, a majority of voters on both sides are putting no pressure whatsoever on their parties to compromise and cut a deal with the “other side”.

Those voters will tell you of their worries about important decisions on health, education, welfare, housing et al not being made, yet those worries don’t lead them to the most obvious conclusion: deal with the past, lessen the separation and make decisions in the collective interests of everyone.

We lack a common goal in Northern Ireland, because we still disagree on the constitutional issue

In 1954, Gordon Allport (one of the modern pioneers in strategies for dealing with the past and building structures for reconciliation) noted: “If individuals from groups in conflict are brought together with equal power and status, having a common goal and under conditions conducive to building trust, they will start to reform their images and feelings about each other”.

Even if Allport’s name wouldn’t be recognised by most, if any, of the key players negotiating the Good Friday agreement, the template is similar to his. With one major exception.

We lack a common goal in Northern Ireland, because we still disagree on the constitutional issue. Some would argue that the common goal of the Good Friday agreement was peace and an end to violence; maybe so, yet there is growing evidence of elements from both sides being prepared to deploy violence to protect what they regard as threatened interests: threats and interests which tend to be recognised because we take so many steers from the past.

BBC NI has been running a series of Spotlight specials on the history of the past 50 years. Every episode brings new and unsettling evidence of what individuals and groups did.

Yet no matter how many memories and impressions and reputations are challenged it remains the case that each side continues to champion their own. UK cabinet papers are released every six months and they, too, bring new and often unsettling revelations. And we’ve now had three recent films dealing with atrocities from the past and they have also seen both sides choosing, as they do with everything else, the version of history and events that suits their existing world view.

What we have, in other words, is us-and-them history. It’s almost as if the vast majority of people here don’t want a collective history, let alone an “impartial” overview. The past is still used as a “weapon” for the present and future. It still dogs every step we take, often with its teeth clamped to our ankles. So difficult is it to deal with that some even argue that we should just draw a line and move one: which isn’t, of course, possible.

Or maybe we just have to accept that the past is summed up in one word: partition. Everything today flows from that decision and will always lead back to it. It is the one issue on which there can be no agreement, no common goal. Which means the orange/green divide remains; the political centre never really takes off; permanent mutual distrust stays at the heart of every debate; and the past – big, brutal, unmovable – is everywhere we look. It is now beyond resolution.

UK economy stagnated in fourth quarter, amid turmoil over Brexit