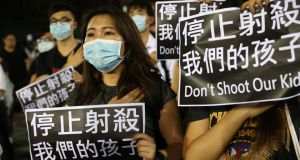 It was a striking juxtaposition: as President Xi Jinping was showing off China’s military and economic might at a parade in Beijing to mark the 70th anniversary of China’s communist revolution, pitched battles were taking place on the streets of Hong Kong between police and huge crowds of young pro-democracy activists. The current round of protests began four months ago, but far from abating, they have been growing in intensity. On Tuesday, police shot a teenage demonstrator at close range. It was the first time since the standoff began that someone had been hit by a live round.

From the outset, the authorities have botched their response to the protests. Initially, the territory’s chief executive, Carrie Lam, constrained by Beijing from making any concessions that might embolden the protesters or encourage restive minorities on the Chinese mainland, dug in over the controversial extradition Bill that had sparked the demonstrations. Lam slowly relented, first suspending the Bill and eventually withdrawing it, but in the meantime the protests gathered more momentum. By mid-summer, they had evolved into a fully-fledged movement for democratic change.

Now the protesters – and the authorities – find themselves at a critical point. The scenes of violence raise the stakes and add to the risk of a dangerous miscalculation. The police must show restraint, and the Hong Kong government should ignore calls from pro-Beijing politicians to invoke colonial-era emergency laws to contain the protests. Doing that would be counter-productive, ratcheting up tensions at a time when the focus should be on bringing all sides to the table.

The protesters have every reason to be sceptical of the government’s offer of dialogue, but Lam’s recent concessions – notably the withdrawal of the Bill and an offer to begin an independent inquiry into recent events – create an opportunity for discussion. That would allow the protesters to press their legitimate demand for universal suffrage without the threat of a disastrous Chinese intervention looming in the background.

1 Fine Gael deletes spoof election video after negative response
2 Mary Lou has to call for the smelling salts as SF councillor deals a knock-out blow
3 ‘He was some man’: Shane’s journey from care child to fearless activist
4 Chris Hadfield on the climate crisis: ‘The world has seen much, much worse’
5 Paul Flynn: Three of my family’s favourite dinners
Real news has value SUBSCRIBE