The Irish Times view on the budget aftermath: the suspension of politics-as-usual 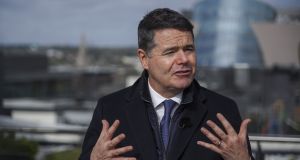 Minister for Finance Paschal Donohoe’s cautious budget was entirely appropriate given the huge uncertainty facing the country over Brexit. For that very reason its political impact was muted. Normally the main Opposition party seeks to exploit the discontent of those who feel aggrieved by the budget, but this year it was very different.

In his response to the Minister’s budget speech, Fianna Fáil finance spokesman Michael McGrath said it was not a time for politics as usual and so his party had afforded the Government the time and space to focus on delivering the best possible Brexit outcome for Ireland.

Fianna Fáil’s responsible approach to the budget, which marks the final instalment of its confidence-and-supply arrangement with the Government, deserves wide acknowledgment. The party’s decision to put the national interest ahead of short-term party advantage stands in glaring contrast to the behaviour of the parties in the House of Commons who have played politics instead of finding a way of co-operating to confront the crisis facing their country.

Fine Gael may well face some backlash from the electorate for not raising pensions or cutting taxes but the other side of the coin is that the budget may go some way to restoring the party’s reputation for fiscal prudence which has taken a battering over the past year.

While Fianna Fáil did not try to capitalise on the Government’s approach, the other Dáil parties did their best to gain some political advantage from the measure.

The Labour Party focused on the failure to increase welfare rates while the Greens insisted that far more should have been done on climate change.

Sinn Féin and the small left-wing parties tried to ramp up as much outrage as they could about the failure to increase welfare rates and condemned the increase in carbon tax. Their argument is wrong-headed.

All the experts, including the Government’s Climate Change Advisory Council, are agreed that a carbon tax is an essential part of this campaign. It seems that Sinn Féin and the hard left share the antipathy to experts expressed by Donald Trump and the Brexiteers.

It goes without saying that it is important to ensure that the weakest and most vulnerable sections of society are protected against steep increases in the price of fuel arising from increases in carbon tax, but this is something on which there is broad political agreement.

Apart from Brexit, climate change is the biggest issue facing the country in the longer term and it is important that the political system rises to the challenge. The budget move is only a start and much more will have to be done in the years to come.