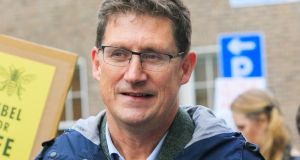 Green Party leader Eamon Ryan: ‘There are ways we can do things that are better for the environment and better for our pocket.’ Photograph: Gareth Chaney/Collins

He believes the Government should incentivise car-sharing, and move towards a situation where a village would have a set amount of cars and there “would always be one available” through a collection and drop-off system.

“We don’t all need to own a car. Most of our cars are sitting in a car park for 95 per cent of the time,” he said.

“It’s only a short walk down to pick it up. You could cycle down to the local collection point.”

Mr Ryan made his comments on Virgin Media’s Ireland AM programme where it was met by some scepticism by Donegal-born presenter Ciara Doherty. “On country roads at 8am in the morning, really?”

He responded: “There are ways we can do things that are better for the environment and better for our pocket. It is happening in other countries of the world.

“It’s not rocket science. It’s using innovation to make a change for the better so you don’t spend money on something that is sitting idle for 95 per cent of the time.”

He predicted that rural Ireland would embrace electric cars quicker than urban Ireland because it was easier to charge a vehicle if you lived in a detached house than in a terrace.

“If you are a terraced house in the middle of the street it’s hard to get electricity from one of those houses.

“The box outside with the ESB pole has a 15 volt capacity constraint. That constraint does not apply in rural Ireland.”

Electric vehicles are “better cars. They don’t break down as much. They are cleaner, cheaper cars”, he added.