Kathy Sheridan: Grown-up Brexit politics must be beyond inter-party snipes 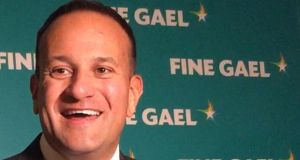 Taoiseach Leo Varadkar: a man with an undeniable air of entitlement and still prone to stupid gaffes. Photograph: David Young/PA

The upside of watching from behind our fingers as British buffoons play games with million of lives, spaffing poison, lies and threats across a continent, is that we know now how not to do it. The fact that we are currently the saner, sounder, immeasurably better-informed party in this equation is not necessarily a permanent state of affairs. The evidence shows how easily a country can tip over into something else; something deeply unlikable, smugly superior, hubristic, delusional. Worse and most unforgivably, it shows how division can be fomented in a country where division is currently negligible. We are not immune.

As a general election looms, the mine-is-bigger-than-yours playground taunts will grow louder, more boorish, reckless and infantile. At this point, a party’s primary aim is to fire up the base by putting clear blue water between itself and the others (no easy task here) so at one level, it makes sense.

But it’s precisely that kind of slaggy unseriousness that makes ordinary voters slam the doors in politicians’ faces and wilfully confuse election leaflets with junk mail.

At the Fine Gael presidential dinner last Saturday, the Taoiseach’s treats for the base included fulsome accolades for his Brexit team. Only an inattentive curmudgeon would quarrel with high praise for Simon Coveney, Helen McEntee and the indefatigable Senator Neale Richmond, a man who bookended one day last week with interviews in two BBC bearpits, beginning with Radio 4 in the early morning and ending a little hollow-eyed with Newsnight over 15 hours later.

Then again, they’re all grown-ups. More than most, they know it’s far too premature for public medal-awards ceremonies. A war is in progress on both sides of the Atlantic, run by crazed, unprincipled protagonists with a scorched-Earth strategy towards themselves and their neighbours. No one has a clue when or how it will end. This is surely not the time for back-slapping of any kind.

But on Saturday night, the Taoiseach didn’t settle for piling on the praise. He used his Brexit team’s dedication and this country’s reputation to take a cheap, silly shot at the opposition. If a Fianna Fáil-led government was in power now, he wondered rhetorically, “who could they send who could match Simon Coveney or Helen McEntee” in Brexit negotiations. Rather like a team manager slagging off the bench half-way through an international.

The crowd loved it.

But remember, it’s the Taoiseach’s actual job to choose the individuals most suited to particular roles. The measure of his success is whether he will be equally happy, in public, to highlight the obviously dud appointments for which he is responsible.

Either way, some issues are too important to be the meat of snotty, partisan jibes. Why exploit the Brexit team’s admirable dignity, restraint and mastery of detail on the international stage to pour scorn on a party that is Varadkar’s effective partner in government ? There are two answers to his question: the first is the knee-jerk one (insert your own obscenities and profanities here) and the second is that we don’t know.

The aura of authority and confidence  power bestows on the barely competent is widely known; we have only to look at some of the simple-minded crazies ruling the world

Many a dissertation has been devoted to the effect of power on the individual. The transformational aura of authority and confidence that power bestows on the barely competent is widely known; we have only to look at some of the simple-minded crazies currently ruling the world. But it can also bring out the best in people. Even their closest relatives would agree that Coveney, McEntee, Richmond et al have surprised many with the ease and competence with which they have grown into tough, international roles. The same could be said of Varadkar himself, a man with an undeniable air of entitlement and still prone to stupid gaffes – but from which he usually manages to extricate himself with prompt apologies and eloquent, elegant, dignified appearances alongside the likes of Boris Johnson and Mike Pence. He too is still growing and developing as a leader. Who knows what others are capable of given the platform?

So was the Brexit barb a blunder ? If not, why would a leader set out to demean this rare and vital point of national unity and pride with a playground taunt? If the purpose was to set the Opposition’s hair on fire, he succeeded. Barry Cowen went to bat for Fianna Fáil, not unreasonably, by noting that “Albert Reynolds did the Downing Street Declaration [and] Bertie Ahern did the Good Friday [Belfast] Agreement”, adding that the Taoiseach “would be better-placed trying to emulate their legacies by securing a Brexit deal that protects the hard-won peace and prosperity . . .”

Plainly (and sadly), this is not the sum of Fianna Fail’s record, but since the Taoiseach’s taunts have opened up the subject of legacies, it is true to say that a. this government’s Brexit legacy is far from delivered and b. that Fianna Fáil leaders did indeed play a major role in the peace process. As did Fine Gael’s Garret FitzGerald, who persuaded Margaret Thatcher to establish the Anglo Irish Agreement in 1985, giving Dublin a vital say over Northern Ireland affairs. As did Fine Gael’s John Bruton who delivered the Anglo-Irish framework documents in 1995 that set out a new understanding between Ireland and the UK. As did extraordinary figures such as John Hume, Mo Mowlam, George Mitchell and many self-effacing Sherpas who took life-, health- and career-threatening risks for that deeply fragile, still unfinished process. A process that still lies at the very heart of our Brexit team’s efforts. A process that should, obviously, be strictly immune from cheapshot party politics.

Let’s all emulate the Brexit team. Let’s resolve to do grown-up politics.

1 Murdered and mutilated: Keane Mulready-Woods and the teenagers of gangland
2 Sinn Féin suspends councillor over ‘beyond offensive’ comments
3 Cork student fatally stabbed in the neck at house party named
4 Patrick Freyne: The mystery of Dermot Bannon and his many surrogate wives
5 Thousands of teachers to strike on February 4th
Real news has value SUBSCRIBE