Kathy Sheridan: Excruciating displays of political machismo are nothing new

Putting your foot in it: Boris Johnson’s bad manners at Élysée Palace is another example

August 22nd, 2019: British prime minister Boris Johnson jokes for the cameras and briefly rests his foot on a table at the French presidential residence, the Élysée Palace. 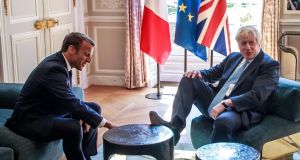 Britain’s prime minister Boris Johnson places his foot on the table during a meeting with French president Emmanuel Macron at the Élysée Palace in Paris, France, on August 22nd. Photograph: Christophe Petit Tesson/AFP/Getty

It was just a little joke between the President of France and his guest. But the spectacle of the British prime minister’s foot up on an Élysée Palace side table was another of those “cheeky chappy” idiocies that a jumpy, frightened world could do without.

Blame the media, blame the bloody-minded Remainers, blame the pearl-clutching Miss Manners brigade for missing the “disarming” sense of fun and mischief of the Old Etonian charmer – but it was Boris Johnson who put his foot up on the table, and then the work of but a moment for alert photographers to send the thuggish image around the world.

Imagine the British reaction had Macron or Obama planted a foot on a Buckingham Palace table?

Was it a signal to Johnson’s home base, a public “up yours” to his most vocal EU critic? More likely, he was being the perpetual adolescent, the swaggering man-child constantly seeking attention, congenitally unable to behave with the decorum or gravitas of a statesman. The sighs of relief from his camp following the G7 summit, where Johnson was seen to be almost euphoric yet failed to launch a diplomatic incident, were almost comical. The bar is that low.

Those who have loudly supported him and Donald Trump must take responsibility for that and for the festering leadership model they have spawned. At a news conference the year after the Brexit referendum and Trump’s election, the Czech president, Milos Zeman – a longtime Trump admirer – waved around a mock assault rifle with “For journalists” inscribed on it.

At the weekend, the Brazilian president, Jair Bolsonaro, took time out from the rainforest catastrophe to respond to a post comparing the appearance of his wife Michelle (37), with Macron’s 66-year-old wife Brigitte. “Now you understand why Macron is persecuting Bolsonaro?”, the Bolsonaro supporter wrote next to an unflattering picture of Brigitte. “Do not humiliate the man hahahah,” Bolsonaro replied, with all the maturity of a hormone-addled 14-year-old. And why not?

During the presidential campaign, Trump tweeted a photo of a professionally burnished Melania (his third wife and former glamour model ) next to an unflattering image of Heidi Cruz (a managing director at Goldman Sachs), captioned “A picture is worth a thousand words”.

Despite Bolsonaro’s hard-right, traditionalist, anti-secularist policies – “God above everything” – the “Trump of the Tropics” makes an exception for serial wives, which is handy if a young wife is required as proof of a throbbing machismo. With Michelle, the 64-year-old Bolsonaro is on his third.

To men such as these, this is hyper-masculinity as a political tool. The women are merely props in the play.

Trump’s routine response to female accusers is that they are not his “type”, too ugly to be raped. When Bolsonaro was accused of rape by a congresswoman, he responded that she “wasn’t worth” raping; she was “very ugly”, not his “type”.

Excruciating displays of political machismo are nothing new of course. Vladimir Putin’s risible picture gallery showing him performing manly stuff such as martial arts and galloping bare-chested on a horse has been augmented in recent weeks with pictures of him posing in tight black leathers with a Crimean bike gang called the Night Wolves.

The album of Matteo Salvini, Italy’s rosary-kissing, populist interior minister, featuring poses with submachine guns and live-streamed videos “wearing enough macho-macho man uniforms to make the Village People blush”, to quote the New York Times, has now been expanded by shots of him campaigning across Italian beaches, bare-chested, in a non-stop series of selfies with thrilled sunbathers. Beach scenes also include the 46-year-old on a sun lounger with his recently acquired 26-year-old girlfriend writhing all over him in “an ecstasy of love”, in the immortal words of Diva e Donna magazine.

Compare and contrast with Angela Merkel’s offering of caution, solidity and quiet diligence, cloaking the determined pursuit and exercise of power; the resolutely bland persona and interchangeable jackets cultivated as a barrier to sexist jibes. She has resisted all attempts to condescend to her or pigeonhole her, as a feminist or otherwise. There is no girliness about her nor any attempt to affect a male-like dominance. What are the chances of finding Angela Merkel with her foot up on a presidential table or waving an assault rifle?

Is this the path for a woman with serious political ambition – cut out all talk of smashing the glass ceiling and inspiring small girls; shut up, watch out, push on till you make it? Or is it enough for feminist purposes that we are able to see her, be inspired by her as one of the world’s most powerful, conscientious leaders, but resolutely unlabelled?

Already the language around US Democratic primary candidate, Elizabeth Warren, includes such loaded terms as “strident”, “dogmatic”, “hard to work with”, “hard as nails”. Yet of all the primary candidates, she may well be the one who has genuinely explored issues, opened her eyes and changed her mind publicly as the facts presented themselves.

Now put any of those terms next to the sleaze, sturm und drang attached to some of the male leaders mentioned above. Then ask yourself how they get away with it.