Time to tell London about our shared history and responsibility 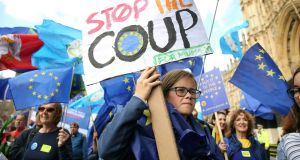 The scene outside Parliament in London on Tuesday. Tempers are rising and unity and solidarity are needed to demonstrate that something sacred to us is at stake. Photograph: Isabel Infantes/AFP/Getty Images

The most dispiriting part of this Brexit horror show is that only five years ago, few Britons gave it a thought. The Ice Bucket Challenge had gone viral and Pharrell Williams’ boppy, joyous anthem Happy was the track of the year. Only 11 per cent regarded the EU as an important election issue.

There were no marches, strikes or protests about the EU. You could have a relaxed scroll through social media without encountering a rant about it.

Immigration was there if you sought it out. Surveys showed attitudes hardening following Ukip’s success in the 2014 local elections.

Yet, in an Ipsos Mori poll of 11 “perils of perception” in late 2015, we learnt that Britons believed on average that a quarter of the population were immigrants; the actual figure was 13 per cent.

Still, no one seemed too interested in the EU or in straightening out the misperceptions. The Tories were too busy trying to catch Nigel Farage’s momentum. In a BBC/Populous poll, the EU came ninth in a question about news importance, trailing behind the NHS, the economy etc. But a few months later, when people were asked a direct question about a possible in/out referendum, three-quarters said they wanted a referendum and 46 per cent said they would probably or definitely vote to leave.

All it required was someone to fashion these elements into a vehicle for spit-flecked hatred, run it with a steel fist, a lot of dodgy money and a talent for sloganeering and – most importantly – a shameless mindset. That same Vote Leave crew is essentially the one that now runs 10 Downing Street.

But why were so many seriously wealthy, well-informed British and US individuals prepared to shovel their money into the project?

For many years, an Ipsos Mori poll for the Economist tracked the percentage of Britons who agreed that “the EU is one of the most important issues facing the country”. Up to 2015, the highest point was about 12 per cent, falling back to 5 or 6 per cent by the end of 2015

But in January 2016, the Economist graph turned sharply upwards. Just a year or so later, more than half of Britons were saying the EU was one of the most important issues facing the country. How have 17 million people been led from near indifference to a dodgy narrative of sunlit uplands in 2016, all the way to “We will ensure that people get the food they need” (Matthew Hancock, cabinet minister, August 2019) and “People could die because of potential problems over access to drugs and isotopes” (David Nicholl, consultant neurologist, September 2019) without rioting?

Is it possible to remain civil in the face of Boris Johnson’s bare-faced claims of “abundant” technical fixes for the Border problem, when we learn from this paper that leaked British government papers show that all potential British solutions to the Border are fraught with difficulty?

Or that – as we learn from the Daily Telegraph – Downing Street’s so-called “legal text” for a new backstop took all of “half an hour” to produce and is actually the old backstop “with all the important provisions crossed out”.

And as our editorial put it yesterday, it was hardly surprising that the 25th anniversary of the first IRA ceasefire passed unnoticed by the British government “as our shared history – and the responsibilities arising from it – appear to mean little to a prime minister intent on whatever political chicanery is necessary to exit the EU irrespective of the implications of the reimposition of a border on this island”.

The bullish ignorance feels a lot like contempt and provocation and as the clock ticks on towards October 31st, it seems that some kind of vent is called for. Sean Geeney, a Malta-based political blogger at abitleftandabitlost.com, has proposed a peaceful protest on this island against any hard Brexit, in the form an unbroken human chain – inspired by events such as the Baltic Way 20 years ago – along the Border or from Belfast to Dublin. Some 100,000 to 200,000 people would be needed to complete the link, he reckons. Apart from the numbers and organisation – involving local GAA clubs, communities, parish groups of all kinds – he acknowledges there would be other challenges, such as the possible perception that it might seem to be more about Irish unity than a hard border or might be subject to politicisation of any stripe or flag.

But it contains the germ of an idea that many are warming to, a response that many feel is required of us when tempers are rising and unity and solidarity are needed to demonstrate to each other and the outside world that something sacred to us is at stake and needs our – and their – protection. Geeney has noted an equally strong response from both women and men and many have said they would take along their children. So it would be a family day too.

“Out beyond the ideas of right-doing and wrongdoing, there is a field I will meet you there.” Rumi, 13th-century Persian poet.

1 Why our love for Leo is withering on the vine
2 Dancing with the Stars: Glenda Gilson sinks like Titanic
3 No obvious signs of injury on remains of McGinley children
4 Una Mullally: Those attacking Sinn Féin have become cheerleaders in reverse
5 Coronavirus outbreak: Irish community endures Hubei lockdown
Real news has value SUBSCRIBE