The Irish Times view on the welfare of Travellers: Shameful neglect 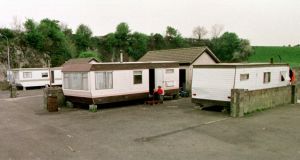 Racism, discrimination and homelessness have been identified as prime contributory factors to the “mental health crisis” among Travellers.

As budget details dominated the airwaves this week, an Oireachtas committee was told that 30 members of the Traveller community, out of a population of 40,000, had taken their own lives this year. That is seven times the average suicide rate within the settled community. Racism, discrimination and homelessness were identified as the prime contributory factors to this “mental health crisis” among Travellers.

The treatment of Travellers by local bigots, councils and politicians has, apart from a few brave exceptions, brought shame on us all. Angry and troublesome individuals may, on occasion, provide reasons for social unease, but that does not justify the wall-to-wall discrimination that is directed at the entire community. Poor housing and dirty, dangerous halting sites are major causes for concern. Ten people died in a fire at a temporary halting site in Carrickmines in 2015.

Legislation designed to provide for their housing needs is being ignored while their formal recognition as an indigenous ethnic minority, while symbolically important, did not change much on the ground. Earlier this year, long-standing plans for the construction of Traveller homes in Dún Laoghaire-Rathdown were abandoned because of local pressure. All councils have a legal obligation to prepare five-year accommodation plans. But, so far this year, less than one-fifth of available Government funding has been drawn down. Dún Laoghaire-Rathdown was one of five councils that failed to apply for any funding at all.

Experiences of discrimination were reported by more than 90 per cent of Travellers in a recent survey and a similar proportion, while proud of their heritage, sometimes felt it necessary to hide it. No specifics in the budget addressed their particular needs: a properly funded mental health strategy; additional educational supports; funding for health projects and sheltered employment opportunities to help them progress into the workforce. Whatever about fiscal prudence and a hard Brexit, the needs of this community demand official attention and urgent investment.