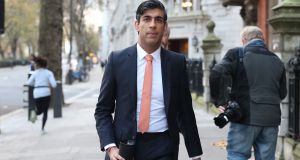 British chancellor of the exchequer Rishi Sunak defended cuts in development aid saying the budget was ‘difficult to justify to the British people’ in these times. Photograph: Yui Mok/PA Wire

While domestic commentary on last week’s spending review from British chancellor Rishi Sunak focused on what it said about coronavirus-era economic strategy, the UK’s friends abroad will be just as interested in how it reflects the evolution of the country’s sense of itself in the post-Brexit world.

What they saw, in massive increases in defence spending 10 days ago and in cuts of one-third in development aid, represent a significant strategic reprioritisation of hard over soft power that will cement the UK’s position as the largest defence spender in Europe and the second largest in Nato, after the US.

The defence boost will lift the £41.5 billion annual budget by £5 billion a year, because the extra £16.5 billion over four years will come on top of a previous commitment to lift it by just above inflation. It is the biggest defence increase since the early days of Margaret Thatcher’s premiership.

“The international situation is more perilous and more intensely competitive than at any time since the cold war, and Britain must be true to our history and stand alongside our allies,” prime minister Boris Johnson argued. As the Brexiting UK does what it can to curtail economic and political ties to allies in Europe, it woos its ally across the Atlantic in the language the latter understands best.

Johnson’s emphasis on shipbuilding and strengthening naval power hints to the US a willingness to be its partner in the key priority of countering China’s predominance in the Pacific. That these ships will mostly be built in Scotland serves his domestic purpose of undermining nationalist arguments with promises of jobs.

The cut to development aid from the UN target of 0.7 per cent to 0.5 per cent of GNP, is deeply disappointing of a permanent member of the security council. The cut in the £15 billion aid budget this year comes on top of one of £2.9 billion due to the sharp decline in growth.

Casting around for excuses, Sunak could only lamely argue that the budget was “difficult to justify to the British people” in these times. But the Tories lost a minister – Lady Sugg, whose brief includes sustainable development, resigned – while there was backbench anger. Andrew Mitchell, former Tory development secretary, warned the cuts “will be the cause of 100,000 preventable deaths, mainly among children”.

Priorities are clear, however. In a far from frugal package, involving some £280 billion pandemic spending next year and an overall economic boost of £40 billion to the economy, the Tories were also not willing to commit to sustaining wage subsidy support after the furlough scheme ends in March, or an extension of the one-year £20-a-week increase in universal credit announced at the start of the crisis.