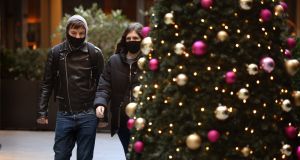 With the comforts of Christmas, there are, perhaps for the first time since the emergency began, hope that better days are on the horizon. Photograph: Dara Mac Donaill / The Irish Times

Not for the first time since the pandemic began, the Government faced a real dilemma in choosing how to adjust the extraordinary public restrictions that have brought parts of the country’s social and economic life to a halt. Ministers had to balance the cautious advice of public health experts with the desire of businesses to resume trading and the wishes of so many people to be able to enjoy as normal a Christmas as possible after a traumatic year.

Reconciling those positions to everyone’s satisfaction was an impossible task. And no decision came without cost or without risk, whether to lives or livelihoods. What the Cabinet has done is to adopt a staggered, partial reopening. The first, starting on Tuesday, will see the reopening of retail, gyms, hairdressers, cinemas, museums, churches and sports clubs. Restaurants and gastropubs will be permitted to operate again from next Friday. Then, from December 18th to January 6th, people may travel across county boundaries and gather in groups comprising up to three households. This sounds about right. Publicans will be dismayed that they cannot reopen, and the loss of Christmas trade is another heavy blow, but in the circumstances it would have been irresponsible of Government to do otherwise.

After six weeks of lockdown, the infection data is positive overall. Hospitalisations and ICU admissions have been stable for more than a month and daily new infections have fallen from more than 1,000 on average to fewer than 300. That number is higher than the target set by the National Public Health Emergency Team (Nphet) but it still places Ireland among the European states doing best at containing the disease.

From next Tuesday, those numbers will only go in one direction, which is why there are signs that Ministers are already resigned to a reimposition of tighter restriction in the new year. That’s a debate for another day. In the meantime, Government has a responsibility to use the coming weeks to fine-tune its test-and-trace infrastructure so it can do a better of job of detecting the disease while it is at manageable levels than it did in the autumn, when at one point the tracing regime ground to a halt. It must invest in intensive retrospective tracing so that we can take informed decisions about where transmission occurs. And it must ensure that the most vulnerable among us, including nursing home residents, asylum seekers and low-paid workers in high-risk settings, receive the support and protection they need.

These are anxious times. The country is under severe strain, and the coming month will not be easy. But with the social solidarity that has brought us to this point, with the comforts of Christmas and the knowledge that vaccines are on the way, there are, perhaps for the first time since the emergency began, solid grounds to hope that better days are on the horizon.