The Irish Times view on the EU budget: a standoff over European values

Poland and Hungary, backed by Slovenia, are vetoing an agreement on the budget in a bid to strip out a ‘rule of law’ mechanism tying payments of EU money to adherence to European values 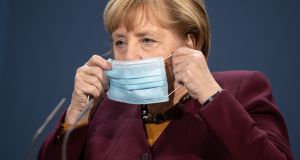 German chancellor Angela Merkel speaks to the media following a virtual meeting with the European Council on Thursday. Germany has the European Council presidency and Merkel is seeking a way forward from Poland and Hungary’s blockade of the EU budget and a coronavirus aid package. Photograph: Andreas Gora – Pool/Getty Images

The remarkable success – and speed – demonstrated by the EU leaders’ July agreement on the emergency €750 billion coronavirus rescue package and seven-year €1.1 trillion budget, now hangs in the balance, caught up in the battle to uphold democratic and rule-of-law standards in member-states. Poland and Hungary, now backed by Slovenia, are vetoing an agreement on the package agreed with MEPs in a bid to strip out a “rule of law” mechanism tying payments of EU money to adherence to European values.

Although the mechanism was agreed unanimously by leaders, Warsaw and Budapest allege it will be used against them politically and now want sanctions only to be applicable if agreed unanimously. That, say the mechanism’s supporters, is tantamount to blackmail and a recipe for continued impunity of those breaching basic EU legal standards. MEPs have said they will not dilute the provision, backed by a large majority of member states, including Ireland.

EU leaders meeting in virtual session for an informal Council were told on Thursday of the deadlock which the German presidency hopes to break before a summit on December 10th. Failure will delay or scale back public investment plans intended to create jobs and boost growth for the next three years. The union would have to fall back on an emergency spending programme for 2021, extending the bloc’s 2020 spending ceilings but only to some ringfenced areas. Those likely to suffer most are Poland and Hungary, recipients of funding totalling 3.4 and 5.0 per cent of GDP respectively in 2018, while they are also among the main beneficiaries of the recovery fund.

The dispute goes to the nature of the EU itself and of the idea of “political union”, a union of shared values not just markets. Speaking to the Polish Sejm, the lower house, prime minister Mateusz Morawiecki on Monday accused the union of using the rule of law as a “propaganda stick” against Poland, outrageously comparing the union’s actions to former communist rule. He spoke of his sense of the EU as a “Europe of fatherlands, a Europe of nations, a Europe as was envisioned by its Christian founding fathers”, conjuring up a coded xenophobia that sees little room for solidarity around universal values. Let alone understanding of members’ desire for accountability to protect their taxpayers’ cash from illegality .

EU leaders must not back down on this issue of principle. The union’s finances cannot be held hostage. If necessary they must sidestep unanimity provisions by developing mechanisms to raise and dispense money outside the structures of the EU institutions. Or avail themselves of treaty “enhanced cooperation” provisions that allow the euro zone and the Schengen area to develop and apply policy for coalitions of member states.

1 Son putting elderly dad under pressure to sign over land
2 Shops, hairdressers and hotels expected to reopen next week
3 Irish tax policy is now a human rights issue for the UN
4 Stir-crazy Dutch holidaymakers set to descend on Caribbean island
5 Miriam Lord: Unity and common purpose in spades but not for Covid fight
Real news has value SUBSCRIBE