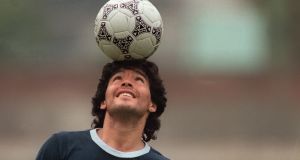 It wasn’t just Diego Maradona’s outrageous skill on the pitch that made him such an icon, it was also his human frailty as he struggled with addiction. Photograph: Jorge Duran/AFP via Getty Images

The scale of the world reaction to the death of Diego Maradona illustrated the stature of a footballer who lifted himself from the depths of poverty in Buenos Aires to become one of the greatest to ever grace the global game. But it wasn’t just his outrageous skill on the pitch that made him such an icon, it was also his human frailty as he struggled with drug addiction and associated health issues. Battling the kind of problems that confront so many became synonymous with Maradona as a career that reached for the stars ultimately foundered.

The ignominious end could never mask the exquisite skill the player possessed and the magical moments he delivered on the greatest stage of all, the World Cup finals. The 1986 tournament in Mexico will forever be remembered as Maradona’s masterpiece as he guided Argentina to victory with a mesmerising display of football brilliance, capped off with the Fifa goal of the century against England and a controversial goal in the same game that still rankles with elements of the British media and former players.

The outrage in England at his opportunism in handling the ball while in an aerial contest with goalkeeper Peter Shilton – matched in many ways by the Irish reaction to Thierry Henry’s deliberate handball against Ireland in Paris in 2009 – was cathartic for Argentines, still smarting from the Falklands debacle four years earlier, when their armed forces were perceived as having been humiliated by Britain. To find redemption in beating England on the way to claiming soccer’s greatest prize elevated Maradona to national hero status.

Despite the controversies that dogged him through the rest of his career as a player and manager, that adulation never wavered in his home country. The tens of thousands who queued for hours to pay their final respects before his burial is testament to that enduring fidelity.

The sublime memories of Maradona’s majesty on the football pitch is what he should be remembered for, not his fall from the highest of pedestals.