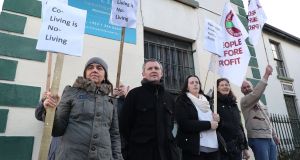 “Co-living is no living”: Protesters including Richard Boyd Barrett TD demonstrate against a co-living development on Eblana Avenue in Dún Laoghaire earlier this year, ahead of the Covid-19 crisis. File photograph: Nick Bradshaw

There is nothing inherently wrong or exploitative about co-living. There is a limited cohort for whom it is desirable and appropriate – people new to a city, short-term contractors, recent graduates unready for the pressure of utility bills. For a steep all-in price, co-living smooths a lot of life’s edges and even has the potential to provide a ready-made social circle.

However, a 2018 ministerial order made the development of co-living so attractive to investors that no other type of apartment scheme could yield the same returns. The same plot could accommodate many more co-living “units”, with lower requirements in terms of light, aspect, space and storage. What should have been a niche in the market became the default.

Apartments are costly to build and typically more expensive to provide than houses. However, in Dublin city and much of the county, density requirements favour applications for apartment developments over housing to help in tackling the capital’s urban sprawl and to make the most of limited land. That co-living schemes ended up stymying apartment construction is an illustration of the law of unintended consequences of conducting planning by ministerial order.

City and county development plans are drafted over several years by local authority planners and councillors and are subject to several rounds of public consultation, whereas ministerial orders are bolt-on additions which supersede the development plan without similar scrutiny.

While Minister for Housing Darragh O’Brien’s ban on new co-living developments is of course also a ministerial order, it merely reverses a previous one.

The hope now, unlike in 2018, is that with a planning regulator in place and centrally involved in the development plan process, any potential future interventions will go through that deliberative exercise and that, however well-intentioned, there will be no more knee-jerk political responses to perceived needs, or to what developers may want at a particular point in time.