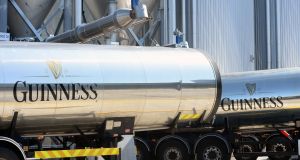 Guinness producer Diageo, which achieved a 44.7 per cent cut in emissions from its operations between 2007 and 2019, is not alone or new to the challenge of emissions reduction. File photograph: Eric Luke

The commitment by Diageo, the world’s largest spirits maker, owner of Guinness and Baileys in Ireland, to reach zero net greenhouse gas emissions from its production by 2030 is an important demonstration that the climate change fight is compatible with other business priorities and that global corporations must share responsibility in helping to meet the challenges ahead.

The company has also pledged to help reduce by half the five times larger emissions from its 30,000 to 40,000-strong supply chain, which includes many small farmers. It promises that all packaging will be 100 per cent reusable, recyclable or compostable within the same timeframe.

The Diageo announcement came as General Motors, the largest American car manufacturer, and fourth largest in the world, said that it would no longer support the Trump administration’s legal efforts to block California’s attempts to impose strict fuel economy rules. The company indicated that it is willing to work with US President-elect Joe Biden to reinstate controls and to reduce climate-warming emissions from cars and trucks.

Ford, Honda, BMW, Volkswagen and Volvo have already said they are willing to accept California’s rules which are likely to form the basis of federal laws under Biden who is expected to move fast to sign up again to the Paris climate accord. His appointment of former secretary of state John Kerry as US international climate change negotiator is a measure of his serious intent. Donald Trump pulled the US out of the treaty which aims to limit global warming to “well below” 2 degrees above pre-industrial temperatures, but which sets targets for net zero emissions for 2050.

Diageo, which achieved a 44.7 per cent cut in emissions from its operations between 2007 and 2019, is not alone or new to the challenge of emissions reduction – Unilever, among others, this year pledged likewise by 2039 – but is the only alcoholic drinks company in the Dow Jones Sustainability Index.

The dependence of the industry on water and heat makes the commitment challenging, but Guinness says it has reduced by half the amount of water it uses to make its stout since 2017. Diageo pledges that by 2030 in water-stressed locations, it will replenish more than it uses.

These are ambitious and welcome targets and it is understandable that Diageo would seek to maximise their impact from a brand and promotional perspective. But such transformation is required of all manufacturing industry. Emissions from Diageo operations in the last year were equivalent to 1.4 million barrels of oil. It is just a single example but it illustrates the potential of – and crucial need for – business around the globe to step up to address the climate change crisis.