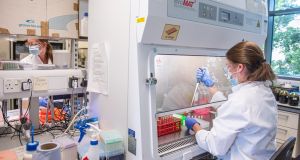 After nine months of hardship and suffering across the world, the remarkable sequence of announcements on initial Covid-19 vaccine trial results has come as an immense relief. And what results they are. Even allowing for the important caveats that accompany these provisional findings, the efficacy of all the leading vaccine candidates is far beyond most expectations. Pfizer and Moderna have both said their vaccines are about 95 per cent effective to date and no significant adverse reactions have been reported in either case.

But given the unprecedented demand for a vaccine – billions of doses will be required as soon as possible – we will need many vaccines, not just one or two. So the news on Monday that the vaccine produced by AstraZeneca and Oxford University was up to 90 per cent effective in late-stage trials is of real significance. European states, through the European Union’s pooled-purchasing scheme, had placed a big bet on the AstraZeneca vaccine. It uses a different design to the mRNA technology pioneered by Pfizer and Moderna, and unlike those vaccines it needs only to be refrigerated, not frozen. That will make it much easier to get the AstraZeneca vaccine to the developing world. It is also unusual among the leading contenders in that, to its producers’ great credit, it will be provided on a not-for-profit basis for the duration of the pandemic.

Each wealthy country also has a responsibility beyond itself, to ensure that the world’s poorest receive their fair share

The cavalry is on the way. But between now and the day when large-scale vaccination occurs, there is a great deal of work to be done. The vaccines must be manufactured at unprecedented scale and speed, then distributed across the globe. Ireland and other states have important preparatory work to do in order to ensure those most in need receive the jabs first and that the drugs can be delivered rapidly when they arrive.

Taoiseach Micheál Martin has said details of a national vaccination plan will be published on December 11th. Public education programmes will be essential. But each wealthy country also has a responsibility beyond itself, to ensure that the world’s poorest receive their fair share. Vaccines should be provided on the basis of need, not means. Yet the initial signs have not been positive. While the G20 on Sunday declared a determination to ensure equitable distribution, the experience so far has been of an every-state-for-itself rush to buy up available stocks. Some rich countries have already bought up more than they will ever need without any plan for distribution of the surplus.

While western governments have reserved most of the Pfizer and Moderna vaccines, the Covax facility, which aims to distribute vaccines equitably around the world, has signed a deal for 300m doses of the AstraZeneca candidate. That’s a good start, though it will need much more to reach its target of providing 2 billion vaccinations by the end of 2021.