The Irish Times view on Covid-19 restrictions: the spirit of shared sacrifice

As people grow weary, their tolerance for those perceived not to be making sacrifices comparable to their own will decrease 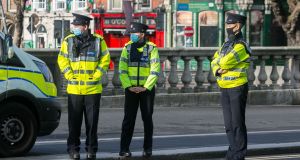 Gardai at a checkpoint on O’Connell Bridge in Dublin this week. Photograph: Gareth Chaney/Collins

Few law reform proposals have had a shelf-life shorter than the Government proposal to crack down on outdoor drinking by groups of two.

Minister for Health Stephen Donnelly brought a memo to Cabinet on Tuesday which proposed making it an offence, punishable by an €80 fine, for two or more people to gather outdoors where one of them was drinking alcohol. But amid resistance from the Green Party and Fine Gael, the plan was withdrawn. An earlier proposal that would have banned pubs from serving takeaway drinks had earlier been put aside.

Both ideas had drawn scorn from publicans and ridicule from those who believe the Government was over-reacting to a small number of instances highlighted on social media of young people congregating in large numbers near takeaway pubs, in Dublin in particular.

It’s undeniably true that it would make more sense for gardaí to enforce existing rules to break up any gatherings deemed in breach of public health rules without denying publicans the one source of income some of them retain. Yet even acknowledging that Covid-19 is less likely to spread outdoors than inside – and that it would therefore be an error to push drinkers towards house parties – the public disquiet over outdoors drinking is rooted in a real public concern.

The “all in this together” spirit of the first lockdown is clearly fraying a little at the edges as people tire of restrictions on their movement. That’s understandable. People are stressed, on edge, and yearn for a time when they can see loved ones and resume something like normal life again.

Young people having a drink on the street are hardly the enemy – they surely believe they are behaving responsibly, and the prevalence of the problem may not be all that widespread – but as people grow weary, their tolerance for those perceived not to be making sacrifices comparable to their own will decrease. The anger directed at those deemed not to be observing the spirit of the current lockdown by drinking in groups outside pubs last weekend is striking evidence of that.

These questions are acutely urgent given the early signs of an apparent reversal in recent days of the trend on newly-reported Covid-19 cases, which have been creeping upwards again. Having spent more than three weeks in lockdown, it’s critical that progress be maintained and that infection rates be brought to the lowest possible level before the planned easing of restrictions in early December.

If that is to be achieved, a sense of shared sacrifice and real social solidarity is vital. Most people instinctively understand that and act accordingly. But when that spirit is breached, the State has a duty first to inform and educate but also to enforce the extraordinary rules it has adopted in the interests of public health.