The Irish Times view on Covid-19 restrictions: moving out of Level 5 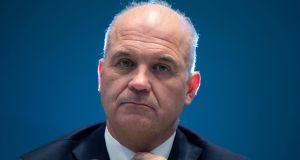 A month into the Level 5 lockdown and just two weeks before those tight restrictions are due to be eased, the satisfaction that resulted from a rapid early decline in incidence of Covid-19 has given way to something very different. Case numbers are not rising but nor are they declining. The National Public Health Emergency Team (Nphet) says progress has stalled and appears no longer to believe that the target of fewer than 100 new cases a day by early December can be reached. That has brought its own recriminations, with the latest sign of discord emerging from a meeting between Chief Medical Officer Tony Holohan and senior officials, who accused Nphet of using media appearances to apply pressure on Government.

The question at the centre of those tensions is what comes after Level 5. The closer we get to December 1st, the more intense the lobbying becomes from employers, trade unions, medics and industry groups. Such tensions are not a problem in themselves; they reflect the balancing act Government faces in reopening the country in a way that protects both lives and livelihoods.

While there is a cogent case behind the view that Government should have given Level 3 longer to have an effect, there is a risk that this week’s rancour will obscure the progress that has been made. Hospitalisations are stable, case counts have been significantly reduced and lives have undoubtedly been saved. That gives the Government more room for manoeuvre next month. At the same time, a cycle of continual lockdowns until the mass distribution of a vaccine would be a terrible failure. We know that from early next month, incidence of the disease will rise again. Some form of ongoing restrictions will inevitably be part of the plan to contain that rise. But just as important is the arsenal of weapons at the State’s disposal – principally the track-and-trace infrastructure, expanded to include the gathering of information on where infections are occurring – so that when cases do re-emerge in larger numbers, they can be caught and kept to manageable levels through the coming weeks and months.