‘Wizard of Oz’ slippers found 13 years after being stolen 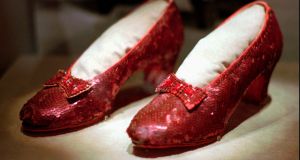 One of the four pairs of ruby slippers worn by Judy Garland in the 1939 film “The Wizard of Oz” on display during a 1996 media tour of the “America’s Smithsonian” traveling exhibition in Kansas City, Missouri. File photograph: Ed Zurga/AP

A pair of sequined ruby slippers worn by Judy Garland in The Wizard Of Oz, which were stolen from a museum in her home town 13 years ago, have been recovered, officials said.

The slippers were taken from the Judy Garland Museum in Grand Rapids, Minnesota, in August 2005 by someone who climbed through a window and broke into the small display case.

The shoes were insured for $1 million. Law enforcement offered an initial $250,000 reward, and a fan in Arizona offered another million in 2015.

The slippers had been on loan to the museum from Hollywood memorabilia collector Michael Shaw.

Three other pairs that Garland wore in the movie are held by the Academy of Motion Picture Arts & Sciences, the Smithsonian and a private collector.

The ruby slippers are key in the 1939 movie. After mysteriously landing in the colourful Land of Oz after a tornado hit her farm in Kansas, Garland’s character Dorothy has to click the heels of her slippers three times and repeat “there’s no place like home” to return.

The shoes are made from about a dozen different materials, including wood pulp, silk thread, gelatin, plastic and glass.

Most of the ruby colour comes from sequins, but the bows of the shoes contain red glass beads.

The genre-busting Wizard Of Oz – presented in black and white and colour – was a box office smash and won multiple Academy Awards, including Oscars for best picture and best cinematography.

Garland, who was born Frances Gumm, lived in Grand Rapids, about 200 miles north of Minneapolis, until she was four, when her family moved to Los Angeles. She died of a barbiturate overdose in 1969.

The Judy Garland Museum, which opened in 1975 in the house where she lived, says it has the world’s largest collection of Garland and Wizard Of Oz memorabilia. – AP

1 Coronavirus: Cabinet to assess ‘stay at home’ measures as 50,000 deaths expected worldwide
2 Coronavirus: Should everybody be wearing masks to combat Covid-19?
3 ‘Everyone still thinks it’s a joke’ - parents of toddler with coronavirus speak out
4 FF-FG government would look to avoid return to austerity
5 ‘It’s Sinn Féin against the rest’: NI Executive in conflict over coronavirus
Real news has value SUBSCRIBE