Donald Trump called ‘idiot’, ‘off the rails’ by chief of staff in new book 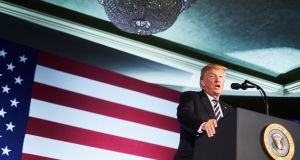 Among the revelations was the way that Donald Trump demeans his own senior advisers behind their backs. . Photograph: J. Kirkpatrick/The New York Times

Fresh insights into Donald Trump’s presidency have been revealed in an explosive new book by veteran journalist Bob Woodward.

The excerpts from the book, published by The Washington Post, depict a White House in chaos and a president who constantly belittled his staff.

Among the allegations is that White House chief of staff John Kelly described the president as an “idiot” who has “gone off the rails”. Mr Trump denounced his attorney general Jeff Session as “mentally retarded” and a “dumb Southerner”.

Such was the level of distrust of the president over the past 20 months that advisors sought to remove documents from Mr Trump’s desk before he signed them, Mr Woodward claims.

After a National Security Council meeting in January on North Korea, an exasperated defence secretary James Mattis said the president had the understanding of a fifth or six-grader (10 - 12 years). On another occasion Mr Trump ordered his defence secretary to kill Syrian leader Basher al-Assad.

Fear: Trump in the White House is based on hundreds of hours of conversations with officials according to Mr Woodward. The 75 year-old shot to fame as one of the two reporters who broke the Watergate story, ultimately leading to the resignation of president Richard Nixon in 1974. More than 40 years later the Washington Post journalist remains a giant of American journalism.

While much of the material quoted was provided on an “off-the-record” basis, Woodward directly quotes people who worked in the White House.

While Mr Trump declined requests to be interviewed for the book, the president phoned the author in August after the book was completed, saying he wanted to participate.

Bob Woodward said he tried to get access to the president in the course of writing the book, but did not interview him. After he had completed the manuscript, Trump called Woodward to express regret for not talking to him, blaming it on aides who he said had failed to inform him of interest.

In a transcript and a tape of the call published by the the Washington Post, Woodward told Trump he interviewed many White House officials outside their offices, and gathered extensive documentation. “It’s a tough look at the world and the administration and you,” he told Trump. “Right,” the president replied. “Well, I assume that means it’s going to be a negative book.” The Washington Post published the full tanscript of the phone call between Mr Woodward and Mr Trump.

The White House said on Tuesday that the book was “nothing more than fabricated stories, many by former disgruntled employees, told to make the President look bad.”

The revelations are likely to increase pressure on the US president as a new opinion poll showed that Democrats are set to out-perform Republicans in the mid-terms elections in November.

Mr Woodward, describes what he dubs as a “nervous breakdown” in the executive branch.

However, current White House chief of staff John Kelly and former counsel John Dowd, who are both quoted in the book, denied having made the alleged comments.

The book sheds light in particular on Mr Trump’s handling of foreign policy. After a national security council meeting on January 19th, the US president reportedly queried why the United States was spending so much money on the Korean Peninsula.

“We’re doing this in order to prevent World War III,” Mr Mattis reportedly replied. He later said: “Secretaries of defense don’t always get to choose the president they work for,” according to the book.

After a chemical attack in Syria in April 2017, Mr Trump phoned Mr Mattis and said: “Let’s f***ing kill him. Let’s go in. Let’s kill the f***ing lot of them,” Trump said, referring to Syrian leader Bashar al-Assad, according to Woodward.

After hanging up the phone, Mr Mattis told an aide: “We’re not going to do any of that. We’re going to be much more measured.” Ultimately an airstrike was ordered by Mr Trump.

The President’s relationship with his aides is explored in detail.

According to Mr Woodward Mr Trump mocked his former national security advisor HR McMaster behind his back, impersonating his stance and breathing, and stating that McMaster dressed in cheap suits “like a beer salesman.”

Attorney general Jeff Sessions – who has been a constant target of Mr Trump’s ire since he recused himself from the Mueller investigation – is also personally lambasted by the president. “This guy is mentally retarded. He’s this dumb Southerner. … He couldn’t even be a one-person country lawyer down in Alabama,” Mr Trump is quoted as saying in the book.

Details of the president’s thinking on the Mueller investigation are also alluded to in the book. Mr Woodward recounts a mock interview session in January between Mr Trump and his personal lawyer John Dowd, designed to mirror any interview between the president and the special counsel. During the interview Mr Trump grew increasingly exasperated at the questioning and dismissed the investigation as a “hoax.”

Mr Dowd and White House lawyer Jay Sekulow subsequently met with Mr Mueller and his deputy in March. Re-enacting the interview they told the Mueller team that they could not allow the president to undergo an interview “and let him look like an idiot.” Mr Mueller told Mr Dowd that he understood, according to Mr Woodward, but Mr Trump subsequently said he wanted to testify. “I’ll be a real good witness,” he told Dowd,

“You are not a good witness,” Dowd replied. “Mr President, I’m afraid I just can’t help you,” he said and resigned the next morning.

Responding to reports of the book’s contents on Tuesday, the White House said in a statement: “This book is nothing more than fabricated stories, many by former disgruntled employees, told to make the President look bad. While it is not always pretty, and rare that the press actually covers it, President Trump has broken through the bureaucratic process to deliver unprecedented successes for the American people.”

White House chief of staff John Kelly was so incensed by the behaviour of Donald Trump that he privately described the president to other aides as an “idiot” and complained that they were in “Crazytown”, according to an incendiary new account of the Trump leadership.

The unflattering portrait of Mr Trump’s White House, in which the US president is portrayed as being so gripped by paranoia over the ongoing Russian investigation that he is barely able to operate, is contained in Fear, the much-awaited book by Bob Woodward. A copy of the book was obtained days before its official release, by the Washington Post, which reported on several of its most arresting details on Tuesday.

Woodward’s depiction of the Trump regime strongly echoes the picture of chaos and pandemonium that was laid out by Michael Wolff in his blockbuster earlier this year, Fire and Fury. But given Woodward’s powerful journalistic brand from his seminal role in uncovering the Watergate scandal in the 1970s, through a series of insider portraits of a succession of presidents, Fear is likely to carry an even greater punch.

The 448-page volume is based, Woodward said, on hundreds of hours of conversations with direct players, but only on an anonymous basis.

Among the revelations was the way that Mr Trump demeans his own senior advisers behind their backs. According to the Washington Post account of the book, the president used to mock his then national security adviser HR McMaster by impersonating him with a puffed out chest.

Some insults were delivered to individuals’ faces. He apparently told the commerce secretary, Wilbur Ross, “I don’t trust you. . . you’re past your prime.”

Days after the nation mourned the passing of the Arizona senator and Vietnam war hero John McCain, there are new bombshell disclosures about the depth of Mr Trump’s disdain for the man. Woodward is reported to describe a dinner at which Mr Trump told senior White House officials that McCain had been cowardly in getting himself released early from a Vietnamese prisoner of war camp.

The defence secretary Jim Mattis had to correct the president by pointing out that the truth was in fact the direct opposite - Mr McCain had refused an offer of early release from his captors, out of solidarity with fellow prisoners.

Perhaps the most disturbing element of the Post’s rendition of Woodward’s book is the alarm it portrays among top national security officials about Mr Trump’s lack of grip over world affairs. After one high-stakes meeting in January of the National Security Council over the North Korean missile threat, Mattis was so exasperated he told associates that the president had the understanding of a 10 year-old school child.

Then there is the outburst attributed to John Kelly. Having called Trump an idiot, he is then said by Woodward to have decried: “I don’t know why any of us are here. This is the worst job I’ve ever had.”–Guardian News and Media