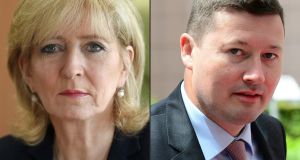 European Ombudsman Emily OReilly is critical of the manner in which Martin Selmayr has been appointed. Photograph: Getty Images

The controversial appointment in February of European Commission secretary general Martin Selmayr involved breaches by the commission of rules that constituted “maladministration”, a report by the European Ombudsman, Ireland’s Emily O’Reilly, has found.

The ombudsman was also critical of the commission’s press service whose response to “valid concerns” by the press and MEPs had been “defensive, evasive and at times combative”.

Responding on Tuesday, chief spokesman Margaritis Schinas said the commission would prepare a detailed response to the report, some of which it took issue with. Mr Selmayr would not be resigning, he said.

Budget and personnel commissioner Güenther Oettinger said the commission welcomed the finding that the appointment had not been illegal and that the ombudsman did not find fault with the choice of the candidate, who is described as a “competent EU official, highly committed to the European Union”.

Following the parliament’s report, he had already committed to convening a round-table discussion with all the EU institutions to reassess the application of senior appointment rules in all of them.

Mr Selmayr had in the course of one commission meeting been appointed to the post of deputy director general. And then, within minutes, to the secretary-generalship to fill an “urgent” vacancy that none of the commissioners were aware had arisen.

Outgoing secretary general Alexander Italianer had indicated to the commission president on appointment in 2015 that he did not wish to serve beyond March 2018. But according to the commission he had only formally reminded Mr Juncker of his intention on the morning of the meeting.

A master of the inner workings of the Brussels bureaucracy, Mr Selmayr was seen as having engineered his promotions in a way that conformed with the letter of the law but not its spirit. It has caused considerable disquiet in Brussels. Few accept that he did not know what was about to happen when the commission meeting convened.

“The maladministration arose due to the commission not following the relevant rules correctly either in letter or in spirit,” Ms O’Reilly reported. “The commission created an artificial sense of urgency to fill the post of secretary general in order to justify not publishing a vacancy notice.

“It also organised a deputy secretary-general selection procedure, not to fill that role, but rather to make Mr Selmayr secretary general in a rapid two-step appointment.”

Ms O’Reilly’s report will reopen the rows about the appointment but is unlikely to jeopardise Mr Selamyr’s job. His continued role under the next president of the commission, to be appointed next year, might be more precarious, however.