Why my brother – and millions of others – are sticking with Trump 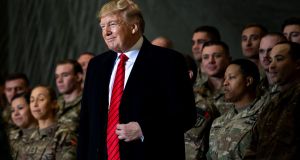 No matter how bad your Thanksgiving is, mine will be worse, and I’ll tell you why. My sister thinks Jim Jordan is hot. Well, she didn’t say “hot” exactly, but the words “admire,” “forceful” and “fighter” have been thrown around.

And then there’s Kevin. It has been a crazy year, even by Trump standards. So I asked my brother to tell us, in his annual Thanksgiving column, if he has any regrets:

Over the last three years, Maureen has frequently sent me reader emails demanding to know how I can still support Donald Trump. My short answer is always the same: Have you looked at the alternative?

The liberals still sneer at religious conservatives. I wouldn’t let them come with me to the Knights of Columbus bar.

In August, the Democratic National Committee passed a resolution saying “religiously unaffiliated Americans” are the largest “religious group” in the party and “overwhelmingly” share Democrats’ values.

The mainstream media and Democrats have tried to valorise the bureaucrats as patriots, but if these people were that conflicted, they should have quit

And certain House chairmen are waiving the words “So help me God” from swearings-in. God help me.

I support the president for his economy, his jobless rate and the record numbers of the stock market that his deregulation fuelled. I applaud his unconditional support of police at a time when I worry we’re returning to a 1960s-style “police are pigs” mindset. (Michael Bloomberg should stop apologising for reducing violent crime in New York City. )

I feel safe in my bed with the way the president is handling Iran and North Korea. Most of all, I support him for saving the supreme court from Hillary Clinton.

Trump came from the roughest job training in the world: the New York construction trade. His manners are sometimes missing. He can be coarse and a bully. But I’ve been pleasantly surprised that he has done exactly what he promised despite a hostile press.

The impeachment inquiry is a farce. Ukraine didn’t do the investigation, and the aid was released. I think that all aid is quid pro quo. The election is in a year. If Trump is as bad as Democrats say, let the voters impeach him.

Adam Schiff has pursued the president with the obsessive zeal of Inspector Javert in Les Misérables, but his results have looked more like Inspector Clouseau’s. His hearings produced a long line of career bureaucrats disturbed and upset with Trump and brimming with second- and third-hand information.

I grew up in Washington with these bureaucrats. It is good to remind them occasionally that the president makes policy and the agencies should carry it out without comment.

The mainstream media and Democrats have tried to valorise the bureaucrats as patriots, but if these people were that conflicted, they should have quit. The hearings ended with a thud and, according to a new Quinnipiac poll, public opinion has even slightly shifted in the president’s favour.

There will not be one Republican vote to impeach. Schiff now finds himself in the uncomfortable position of Elizabeth Taylor’s sixth or seventh husband, who, legend has it, cried, “I know what is expected of me on the wedding night, but how can I possibly make it more interesting?”

Hopefully, the coming inspector general report will be worse than we’ve been led to believe, causing night sweats for James Comey, Andrew McCabe, John Brennan, James Clapper and “the lovers”.

The Democrats have never recovered from the 2016 election, when they nominated the worst candidate in political history and lost to a political novice. Their horror at Trump conjures Lady Macbeth crying in agony, “Out, damned spot.”

All of the Democratic candidates support Medicaid coverage of abortion and nominating only judges who endorse abortion rights. As for the best and the brightest the Dems have to offer: Elizabeth Warren/Bernie Sanders – if you combine the support of the two billionaire-bashing socialists, they lead the field.

You might consider vacationing in Venezuela before committing to them, or they could run together as the End of Days ticket. Joe Biden/Michael Bloomberg: like Bloomberg, Biden has been forced to grovel and renounce all past career accomplishments on crime prevention. Kamala Harris/Cory Booker: they’re having trouble lighting the spark, even with some black voters.

Amy Klobuchar/Pete Buttigieg: they are the two least crazy people in the field, which means they have absolutely no chance. The Martin O’Malley Award to Beto O’Rourke for thinking a vague resemblance to the Kennedys, an Annie Leibovitz Vanity Fair cover and a 214,000-vote loss to Ted Cruz could carry him to the nomination.

The mainstream media has reached a new low. It is not even pretending to be objective as it relentlessly batters the president daily (putting Trump just ahead of Harvey Weinstein and trailing only Satan).

Reporters write opinion columns packed with innuendo and anonymous sources – not to mention what Anonymous is cooking up. Newspapers that once had the most stringent editing rules on sources now appear to have no editors at all.

The Washington Post reached a new journalistic low when it described the world’s number one terrorist as an “austere religious scholar” after our forces cornered him and he blew himself up. Somewhere, Abe Rosenthal weeps. The irony is that Trump drives news circulation.

Without him, subscription rates would be cut in half. Finally, one recent HuffPost piece turkey-shamed us all, suggesting that, for this beloved holiday, we consider curbing “the carbon footprint” of our turkeys and travel. These Democrats are a lot of fun. Happy Thanksgiving. – New York Times