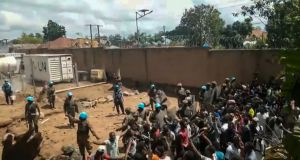 Crowds confront United Nations peackeepers in a UN compound on the outskirts of the eastern DR Congo town of Beni, in protest at massacres in the region. Photograph: Ushindi Mwendapeke Eliezaire/AFP via Getty Images)

Ongoing violence in eastern Democratic Republic of the Congo has led protesters to attack a UN base and town hall, while forcing medical workers tackling the Ebola outbreak into lockdown. At least 60 people have been killed in the past few weeks, after the Congolese army launched an offensive against an Islamic militant group, according to officials.

Aime, a Congolese health promoter working on the Ebola response in the city of Beni, where the violence is taking place, told The Irish Times that he has witnessed many of the attacks and subsequent protests. He said he is incredibly worried, both because of the problems for medical teams and also for the general safety of civilians.

“It is [getting] worse,” he said. “The area is insecure. I call for pacification of the area as an urgent need so that the [Ebola response] team can intervene.”

The fighters carrying out the attacks on civilians in Beni are believed to belong to the Allied Democratic Forces (ADF), an Islamic militant group. In June, The Irish Times interviewed an 11-year-old boy who escaped the ADF. He said ADF militants are recruiting and training children to launch attacks against the Congolese army. There are some indications the ADF also has links to Islamic State, after an islamic State spokesperson claimed responsibility for one of the attacks.

Meanwhile, protesters in Beni accuse UN peacekeepers of failing to protect them. On Monday, dozens burned down a UN base and town hall in retaliation. The same day, Amnesty International’s deputy director for East Africa, Seif Magango, said in a statement: “It is scandalous that civilians are dying day in, day out while the local police and nearby UN peacekeepers stay put in their camps. It is high time all entities charged with civilian protection in the DRC, including the UN mission, take steps to fulfil their mandate and bring an end to these killings.”

On Twitter on Tuesday, Tedros Adhanom Ghebreyesus, the director general of the World Health Organisation, said Ebola responders in Beni were on “lockdown amidst gunfire, riots and civil strife, but still trying to protect people at risk of contracting the virus”.

“Teams are arranging contact follow-up by phone and remotely guiding community health workers in places we can’t reach,” he said. “Each day that we don’t have full access to all Ebola-affected areas in DRC we cede ground to the virus, prolonging the outbreak. This is a tragedy because it will only add to the suffering of already overburdened communities.”

The 16-month-long Ebola outbreak in eastern DRC has killed nearly 3,000 people, though advances in treatment mean that hundreds of thousands of Congolese citizens have now been vaccinated and more are being cured after contracting Ebola. Last week, the WHO recorded only seven new cases.