The UK’s ‘grey voters’: ‘Corbyn will set the country back 50 years’ 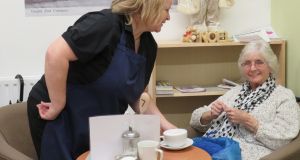 Tuesday is knit and natter day at the Community Hub and Cafe in Sedgley, a West Midlands village that can trace its history back to the Domesday Book of 1086.

Linda Chatwin is delighted with the teddy bears she has knitted for her three granddaughters, but when the subject of the election comes up her sunny mood evaporates. “You never hear anything about the needs of pensioners, do you? If they give us more money, they just take it off us.”

She’s not impressed by Labour’s left-wing manifesto. “Labour just dish it out willy-nilly. Where’s the money coming from to do all this? If you haven’t got the money, you live within your means, like we used to.” The Conservatives, meanwhile, are “for looking after the rich, never mind the poor”.

She is left with the same dilemma facing a lot of people here in the cafe, which is run by Age UK for Sedgley’s older people, and across the wider ultra-marginal constituency of Dudley North. “Who do you vote for?”

This election is dividing British people not along traditional party lines, but between those who just want to “get Brexit done” whether they originally voted for it or not, and those who wish they could stop it. Chatwin is in the former group and is probably voting Conservative because “why should we have to vote again [on Brexit]”.

With just in excess of two weeks to go until the election, some of the older generation here, whose votes proved so decisive on Brexit, are feeling ignored and angry. Their anger isn’t confined to Brexit; they’re furious about a lot of things, including TV licences and changes to pension entitlements.

“Give us our tellies back,” says Mavis Cove, a retired gas welder in her 80s, when she’s asked about the issues that will get her out to vote. Since June, free TV licences have been available only to the over-75s on social welfare, under a Conservative plan introduced in 2015.

Her friend Jane (she doesn’t want to give her surname) turned 65 in May and has just retired from a career in retail, but will only be able to claim her pension from next January. “I should have been able to retire at 60, but they changed the rules.” She won’t get her heating allowance until next year either, and had to fight for her free bus pass. “It’s been really tough.”

What’s not clear is how that anger will be manifested in the upcoming election. In this crunch constituency, there’s little consensus about which party is more likely to look after the needs of older people, and still less enthusiasm for the leaders of the two main parties.

Labour can no longer rely on the votes of lifelong Labour supporters in what was once this Labour heartland – and at least some of that is down to Jeremy Corbyn’s neutral stance on Brexit. “You have to vote, else you can’t say anything about the outcome,” says Cove, who has always voted Labour. But she doesn’t yet know what she’ll do on December 12th. “It’s Jeremy Corbyn I’m not keen on.”

Graham Groom – who’s here for the coffee and the chats, not so much the knitting – is voting Conservative, as he always has, though he has reservations about Boris Johnson. “I wouldn’t say he’s my favourite cup of tea. When he came abseiling down that wire a few years ago” – a reference to the British prime minister famously getting stuck on a zip wire during the 2012 Olympics – “I thought: ‘What a prat.’” But he’s better than Corbyn, “who’ll set the country back 50 years”.

Groom was one of just 28.5 per cent of voters in the constituency who voted to remain in the EU, having made up his mind after talking to his adult children. Now, he’s in the get-Brexit-done camp. “In fairness to Johnson, he’s the only one who seems to want to get something sorted. Whether [Brexit] proves to be right or wrong, it’s up to us now.”

He remains unconvinced by the much-taunted notion of Brexit as an opportunity to reclaim a British idyll of rolling farmlands and streets paved with opportunity. Then he says something you don’t expect to hear from one of Britain’s so-called disgruntled “grey voters”. He was born during the war, enjoyed a time of economic prosperity for the West Midlands in his young adulthood, and says he probably won’t live long enough to see the effects of climate change.

“For us, life just got better and better. We had the kind of uplift our parents could only have dreamed of.” Those days are gone now. “History will show we were the lucky generation.”

* Jennifer O’Connell will be reporting from two of Britain’s most marginal constituencies, Dudley North and Newcastle-under-Lyme, this week, and will return again before the election to see if the mood on the ground has changed.