UK police say the man who killed two people in a knife attack on London Bridge on Friday has been named as 28-year-old convicted terrorist Usman Khan. Video: Reuters 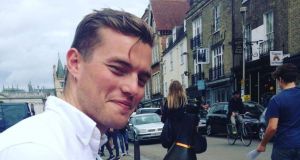 Jack Merritt worked as the course coordinator for Learning Together, a programme run by the University of Cambridge’s institute of criminology. Photograph: Facebook

A woman killed in the London Bridge terror attack on Friday has been named by the Metropolitan Police as Saskia Jones (23) from Stratford-upon-Avon, Warwickshire.

Earlier, it was announced that the second victim was a former Cambridge student by the university.

In a statement, Prof Stephen J Toope, the vice-chancellor of the university, said: “I am devastated to learn that among the victims of the London Bridge attack were staff and alumni of the University of Cambridge, taking part in an event to mark five years of the Learning Together programme.

“What should have been a joyous opportunity to celebrate the achievements of this unique and socially transformative programme, hosted by our Institute of Criminology, was instead disrupted by an unspeakable criminal act.

“I am sad beyond words to report that a course co-ordinator, Jack Merritt, was killed, as was a former student not yet named by the Metropolitan police. Among the three people injured, whose identities have not been publicly released, is a member of university staff.

“Our university condemns this abhorrent and senseless act of terror. Our condolences, our thoughts and our deepest sympathies are with the victims and their families.”

The first victim of the attack was named as Jack Merritt on Saturday, who worked for a programme aimed at improving prisoner rehabilitation.

The 25-year-old’s death was confirmed by his father, who described his son as a “champion for underdogs everywhere”.

Merritt worked as the course co-ordinator for Learning Together, a programme run by the University of Cambridge’s institute of criminology which had been running a course at Fishmongers’ Hall next to London Bridge on Friday.

Two people were killed and three were injured when 28-year-old Usman Khan launched a knife attack.

David Merritt posted on Twitter on Saturday: “My son, Jack, who was killed in this attack, would not wish his death to be used as the pretext for more draconian sentences or for detaining people unnecessarily.”

Mr Merritt said: “Cambridge has lost a proud son and a champion for underdogs everywhere, but especially those dealt a losing hand by life, who ended up in the prison system.”

He described his son as a “beautiful spirit” and said the Cambridge community was in shock.

Metropolitan Police Assistant Commissioner Neil Basu earlier said 28-year-old Khan had been living in the Staffordshire area and he added police were “not actively seeking anyone else” over the attack, which left a man and a woman dead.

In a statement on Friday night, Mr Basu said: “We are now in a position to confirm the identity of the suspect as 28-year-old Usman Khan, who had been residing in the Staffordshire area. As a result, officers are, tonight, carrying out searches at an address in Staffordshire.

“This individual was known to authorities, having been convicted in 2012 for terrorism offences. He was released from prison in December 2018 on licence and clearly a key line of enquiry now is to establish how he came to carry out this attack.”

Khan was wearing a fake suicide vest when he was killed on London Bridge on Friday afternoon in full view of horrified onlookers.

Three people – a man and two women – were also injured in the rampage and are being treated in hospital, Mr Basu said.

In February 2012, Khan was ordered to serve at least eight years in prison over his part in an al-Qaeda-inspired terror group that plotted to bomb the London Stock Exchange and build a terrorist training camp on land in Pakistan-controlled Kashmir owned by his family.

The Stoke-on-Trent-based radical, along with two co-conspirators, originally received an indeterminate sentence for public protection but this was quashed at the Court of Appeal in April 2013 and he was given a determinate 16-year jail term.

Speaking before chairing a meeting of the Government’s emergency committee Cobra on Friday night, UK Prime Minister Boris Johnson said he had “long argued” that it is a “mistake to allow serious and violent criminals to come out of prison early and it is very important that we get out of that habit and that we enforce the appropriate sentences for dangerous criminals, especially for terrorists, that I think the public will want to see”.

Khan was attending a conference on prisoner rehabilitation organised by University of Cambridge-associated Learning Together at Fishmongers’ Hall and “threatened to blow up” the building.

Professor Stephen Toope, Vice-Chancellor of the University of Cambridge, said he was “devastated” that an event organised by its Institute of Criminology was targeted in the attack.

He said: “I am devastated to learn that yesterday’s hateful attack on London Bridge may have been targeted at staff, students and alumni attending an event organised by the University of Cambridge’s Institute of Criminology.

“We are in touch with the Metropolitan Police, and awaiting further details of the victims.

“We mourn the dead and we hope for a speedy recovery for the injured. Our thoughts are with all their families and friends.”

Mr Basu said police believe that the attack began inside the Fishmongers’ Hall “before he left the building and proceeded onto London Bridge, where he was detained and subsequently confronted and shot by armed officers.

“Extensive cordons are likely to remain in place for some time and I would ask the public to continue to avoid the area.

“Public safety is our top priority and we are enhancing police patrols in the City and across London.”

Thomas Gray (24) was among a group of men who dragged Khan to the ground near Fishmongers’ Hall.

The tour firm manager said he stamped on the terrorist’s wrist to try to make him release one of two large knives he was carrying.

Mr Gray told the PA news agency: “I was brought up on rugby and the rule is ‘one in, all in’. I did what any Londoner would do and tried to put a stop to it.”

The members of the public who intervened have been widely praised, with Mayor of London Sadiq Khan hailing their “breathtaking heroism” and Mr Johnson their “extraordinary bravery”.

The bridge was the scene of a terror attack in 2017 – also during a general election campaign – when eight victims were killed along with the three terrorists, who were also wearing fake suicide vests and armed with knives. – PA and Guardian