US to impose new sanctions on Iran as early as Monday

Iranian politicians chanted "Death to America!" during a parliament session on Sunday, June 23rd amid escalating tension with Washington following the downing of an unmanned US drone. Video: Reuters 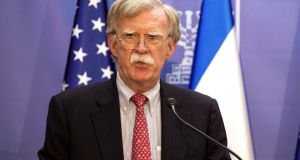 The United States will unveil new sanctions on Iran as early as Monday, US national security adviser John Bolton has said, warning that Iran should not “mistake US prudence and discretion for weakness”.

Speaking alongside Israeli prime minister Binyamin Netanyahu during a visit to Israel, Mr Bolton noted that President Donald Trump had just stopped the strikes from taking place “at this time”.

“As President Trump said on Friday our military is rebuilt, new and ready to go,” he said.

Mr Bolton was speaking days after Mr Trump abruptly called off planned air strikes on Iranian targets that had been planned as retaliation for a shooting-down of a US naval drone in the Persian Gulf region last week. US media also reported that the US launched a cyberattack on Iran’s weapons systems on Thursday, disabling the computer systems that control missile launchers though there was no confirmation from the White House.

Mr Bolton’s comments in Tel Aviv were seen in part as efforts to reassure US allies in the region, including Israel and Saudi Arabia, that the United States will remain tough on Iran, despite aborting a planned air strike. His threat of new sanctions echoed warnings from Mr Trump over the weekend that new sanctions were imminent.

Mr Netanyahu said he welcomed the prospect of further economic pressure on Iran, adding that the 2015 Iran nuclear deal had only served to give the country more cash, arguing that “tens of billions of dollars” had poured into Iran’s coffers.

Mr Trump was asked on Saturday as he left the White House for Camp David if he still had confidence in Mr Bolton, who is well-known to have hawkish views on Iran and previously advocated regime change. “I do,” he replied. “John Bolton is doing a very good job but he takes generally a tough posture,” he said, adding: “ultimately I make the decision”.

Mr Trump warned in an interview with NBC that war with Iran would be “obliteration like you’ve never seen before.” But he struck a more conciliatory tone in his comments to journalists on Saturday as he departed for Camp David, claiming that he could help “make Iran great again” if Tehran co-operates.

Mr Trump suggested that he could be open to negotiations with Iran. “We’ll start all over. We could have a deal with them very quickly. It’s up to them,” he said. He dismissed the 2015 nuclear deal struck by president Barack Obama and other international powers, arguing that it would have allowed Iran to legally build a weapon in a number of years and did not allow full inspection rights.

He said that, as a New Yorker, he knows a lot of Iranians, describing them as “very smart, very ambitious”.

“I come from New York City. We have a lot of Iranians and they’re great people,” he said. “I have many friends who are Iranians. I don’t want to kill 150 Iranians,” he added, referring to his decision not to sanction military strikes on Iran after he was advised that 150 people might be killed. He again defended that decision, repeating his view that a military strike would have been disproportionate to the shooting-down of an unmanned US drone.

He also said that Iran was wise not to shoot down an American aircraft carrying passengers, following claims from Tehran that it refrained from shooting down a second aircraft last week.

The president also dismissed suggestions that the ongoing standoff between Washington and Tehran was about oil and keeping access to the Straits of Hormuz, a key thoroughfare for oil tankers.

“We are the number one oil producer – oil and gas – in the world by far,” he said. “We don’t really need the straits anymore. The biggest beneficiary of the straits is China. Ninety-one per cent of their energy comes out of the straits,” he said, adding that Japan and Indonesia also benefit. “We are doing them a very big service.”

The UN Security Council which includes China and Russia as members, is expected to discuss Iran on Monday at the request of the US. Mr Bolton is also due to meet with Russian officials to discuss the situation in the Middle East, including in Syria.