Inside the Trump presidency: A mad king roams empty halls 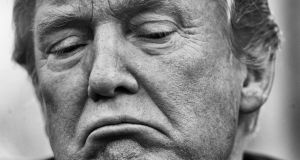 In black and white: ‘I do not think an idea has ever crossed Donald Trump’s mind. This is elemental,’ Michael Wolff says. Photograph: Doug Mills/New York Times

When we look back on the strange period known as the Trump presidency, we will have no shortage of eyewitnesses on which to draw, from the deeply sourced journalism of Bob Woodward to the forensic investigations of Robert Mueller, and reams of in-depth investigative reporting by the New York Times and many others.

One book will stand out, though, for its combination of extraordinary access and from-the-hip prose. When Michael Wolff finagled a White House pass in the first weeks of the administration, in 2017, he sat down and stayed, and nobody ever asked him what he was doing there.

“I just knocked on the door,” he says. “It was the simple fact that I asked. I don’t think anyone else asked. And given the absolute disarray and disorganisation of the Trump White House, I kind of slipped in.”

There are fewer and fewer journalistic outlets. So everyone necessarily speaks with the same voice. There aren’t that many independent voices, and I just happen to be one of them

It was when Steve Bannon left his job as Trump’s senior strategist that Wolff decided it was time to “pull down the curtain on what I continue to think of as the first act of this administration”.

The resulting book, Fire and Fury, was a sensation, with its depiction of a chaotic court of backstabbers and incompetents, headed by a venal, unstable president driven solely by impulse and ego.

The book was attacked by what Wolff describes as “a big peanut gallery” of critics for supposed inaccuracies. “But I think every account since has confirmed what was in that book.”

He also thinks a lot of the criticism stemmed from contemporary groupthink. “There are fewer and fewer journalistic outlets. So everyone necessarily speaks with the same voice. There aren’t that many independent voices, and I just happen to be one of them.

Despite spending his career in media, the combative New Yorker sees himself as a writer rather than a journalist: “I don’t come to this process looking for scoops, although I certainly get my fair share of them,” he says. “I come trying to put the experience on the page, bring people into the story.

“You can read Fire and Fury and you can read my new book, and for the time you read it, I think you feel you’re there, you’re in the middle of this, you have some appreciation of not just the lunacy of this but of the true emotional tenor of what goes on in Trumpworld.”

That’s certainly true of Fire and Fury, but Wolff, unsurprisingly, was barred from the White House after its publication. Did he have any inside sources for Siege: Trump under Fire – the new book, also set inside the White House and depicting a president metaphorically under siege?

He hedges his answer by saying a large number of the people who contributed to the first book have continued to contribute to the second.

“The distinguishing factor between then and now is that no one is in the White House,” he says. “The only people left are a few very junior staffers who have become senior staffers and [then] you have the president’s family and that’s about it.”

Although it adds some salacious stories, such as Trump allegedly claiming to have been sexually serviced by his former UN ambassador, Nikki Haley, Siege is far from the only account depicting Donald Trump as mentally unhinged, illiterate, innumerate and incapable of deciphering or decoding other people. Somebody, in short, who is mentally unwell.

“But I would like to push that further,” says Wolff. “Because a lot of people said, ‘Well, we already know this.’ What I hope I have accomplished here is to take all of those things and to show actually what it’s like when a man like this, a man whose faculties are always in question, what it is like to have this man occupy the most powerful job in the world.”

I’m reminded of one of the many bizarre subplots in this tale; the fact that George Conway, a conservative legal thinker who is married to the Trump adviser Kellyanne Conway, has been tweeting exactly the same thing about the president’s mental health. Does the Conway family drama offer a hint that the sustaining system around Trump is beginning to crack, or should we just accept this as part of the general madness?

“There is no sustaining system,” says Wolff. “This is true of Donald Trump himself. He believes he doesn’t need anyone around him. The Conway situation, their marriage is another kind of dimension of absurdity and ludicrousness. I discuss this in the book; they are together on this. This is their weird way of hedging their bets. The husband vilifies Trump while the wife theoretically supports him.”

In advance of Siege’s publication, a story from it leaked to the media about a document purportedly produced by special counsel Robert Mueller’s investigation, into the pros and cons of indicting the president for obstruction of justice. Doubts have been expressed about the document’s veracity, partly because of some of the wording, and also because the special counsel’s office itself flatly denied its existence.

“This is just part of the whole baloney of Washington. In this day and age everyone feels that they can deny the obvious,” says Wolff, who describes the special counsel’s statement as “a fairly succinct non-denial denial”.

He also rigorously defends himself against criticisms of inaccuracies on points of fact such as which lawyers represented Trump at certain stages and on the chronology around the hacking of the emails of John Podesta, chairman of the Democratic National Committee.

“I actually don’t know what’s not correct in the book,” he says.

“I chose not to regard the two lawyers that are mentioned as very germane to the Trump legal team. But sometimes I want to say, ‘Do you know how to read a book?’ There may be a detail here or there that’s wrong. The New York Times every day runs a copious list of the details it gets wrong. This is the exact same thing I heard with Fire and Fury.

“The picture that I am drawing of this White House, of Trumpworld, is not only an accurate one but I think to date the truest and the most vivid that anyone has drawn.”

He also robustly defends his reliance on Bannon, depicted here as a political savant plotting and planning his next move from his headquarters in a Washington townhouse.

“I think he’s the most acute observer I know, and I know all of the first-hand observers of the Trump White House,” he says.

Obviously Bannon has an axe to grind, though.

“I don’t even know what that means, an axe to grind,” says Wolff. “Actually in some ways, he has the opposite of an axe to grind. The survival of the Trump White House and of Donald Trump is very important to his own future. So where he comes out on this is not quite clear. It’s his own divided self here, his own ambivalence. I actually think it helps to put him in a position to pretty much tell the truth.”

In its review of Siege, the Washington Post criticised Wolff’s “obsession with documenting Bannon’s every thought while remaining uninterested in the reality of the racial politics unleashed by him and Trump”.

What does he say to the argument that the picture he paints, of the mad king roaming the empty halls, ignores the fact that there is a real ideology at work here which many people find repellent, and of which Bannon is a part?

In Wolff’s view, that’s just somebody bringing their own political viewpoint to the story.

“Which is not a problem,” he says. “Everybody can have political views. It’s not what I’m trying to do here. I’m not the pundit here, I’m not the ideologue, I’m not the person who is arguing for a Democratic victory.

“I am the person who is trying to describe what is in front of me, what I am seeing and what I am hearing.”

But politics is about ideas as well, isn’t it?

“Not necessarily. I actually think that’s a key point here. Everyone thinks politics is about ideas. What if it’s not about ideas?”

Steve Bannon seems to think politics is about ideas.

Wolff may not want to be a pundit but, but I ask how he thinks all of this will end. “If forced with a gun to my head, I would say this ends badly,” he says, citing an exchange in the book in which Bannon is talking to an old Trump crony. “Bannon is speculating on what happens if the pressure gets too great – investigations, subpoenas – what does Trump do. And Bannon says, ‘You know, I think he might kill himself.’ And the friend says, ‘No, no, no, no. He’ll fake a heart attack.’

“So I just can’t help thinking that this doesn’t end happily and it doesn’t end conventionally. At some moment the house comes tumbling down.”

Siege: Trump under Fire is published by Little, Brown