US president Donald Trump says that he believes the shooting down of an American drone by Iranian forces was an individual mistake rather than an order from the Iranian government. Video: The White House 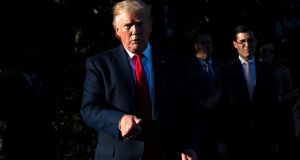 Donald Trump: words appear to signal that there may not be an immediate US response to the incident. Photograph: Erin Schaff/New York Times

US president Donald Trump has said “Iran made a very big mistake” in shooting down a US drone, increasing tensions and talk of possible open conflict.

Iran and its proxies have been pushing back against the Trump administration’s “maximum pressure” campaign, raising fears that a miscalculation could trigger armed conflict.

Iran has been blamed by the US for recent attacks on other nations’ shipping vessels, but the downing of the huge drone was the first direct Iranian assault against the United States.

Mr Trump had been given a series of options on Thursday night on how to respond to Iran’s downing of the drone.

Senior military advisers pushed towards a plan to launch strikes on a trio of sites within Iran, and it was up to president Trump to give the final go-ahead.

He said his decision would come from “his gut”.

“I want to know something before you go,” president Trump said to his military officials. “How many people will be killed?”

American and Iranian officials are disputing the circumstances of the incident. Iran’s Revolutionary Guard said it shot the drone down over Iranian airspace.

The US military is calling the downing an “unprovoked attack” and said it occurred over international airspace in the Strait of Hormuz.

A senior US military official said Iran shot the unmanned aircraft down over international waters in an attempt to disrupt American efforts to monitor the Persian Gulf area.

Air Force Lieutenant General Joseph Guastella said the downing of the drone followed recent threats to international shipping commerce in the region that the US had blamed on Iran.

The commander of US Central Command air forces in the region disputed Iranian claims that the drone was over Iranian air space.

He told reporters on Thursday that the aircraft was at high altitude and at least 34 kilometres from Iranian territory when it was shot over the Gulf of Oman.

Mr Trump’s words appear to signal that there may not be an immediate US response to the incident.

The president has said repeatedly that the US does not want war in the Middle East, yet members of Congress reacted quickly with that possibility as background.

The Senate’s top Democrat called the downing of the American drone “deeply concerning” and accused the administration of not having an Iran strategy and keeping Congress and the American people in the dark.

“The president needs to explain to the American people why he’s driving us toward another endless conflict in the Middle East,” Senator Chuck Schumer said.

House Speaker Nancy Pelosi said she did not think Mr Trump wanted war with Iran and the American people had “no appetite” for it either.

She said the US needed to be “strong and strategic” about protecting its interests and “cannot be reckless”.

Mr Graham, who spoke with Mr Trump by telephone on Thursday morning, said the Iranians had rebuffed the president’s willingness to negotiate by refusing to respond to a letter from Mr Trump recently hand-delivered by Japanese prime minister Shinzo Abe.

“Not only did the Iranians give a provocative oral response, but they also attacked a Japanese oil tanker at the same time,” Mr Graham said, referring to the attack on Kokuka Courageous, a Japanese tanker carrying Saudi methanol that was travelling in the Gulf of Oman.

In recent weeks, the US has sent an aircraft carrier to the Middle East and deployed additional troops alongside the tens of thousands already in the region.

She said the administration would also keep in touch with lawmakers on Capitol Hill who have demanded briefings on the US conflict with Iran.– AP