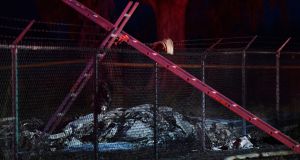 Remnants of an aircraft carrying nine people lies on the ground near a fence that surrounds Dillingham Airfield in Mokuleia. Photograph: Bruce Asato/Honolulu Star-Advertiser via AP

Eleven people on board a twin engine aircraft died after a crash on Oahu’s North Shore, officials in Hawaii said.

There were no survivors in the crash of the King Air plane, Hawaii Department of Transportation spokesman Tim Sakahara said.

The crash occurred near the small Dillingham Airfield, an airport on the North Shore.

The motorway in front of the airport was closed in both directions.

Other details of the crash, including whether the plane was landing or taking off at the time of the crash, were not immediately known, Mr Sakahara said.

Officials initially reported that nine people had been on board. – AP