Trump says US was ‘cocked and loaded’ for Iran air strike 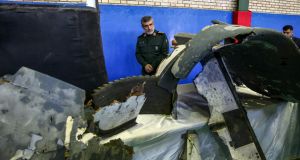 US president Donald Trump has said he cancelled a planned military strike on Iran on Thursday night because it was “not proportionate to shooting down an unmanned drone”.

“We were cocked & loaded to retaliate last night on 3 different sights [sic] when I asked, how many will die. 150 people, sir, was the answer from a General,” Mr Trump tweeted on Friday morning, as he said military strikes would not have been proportionate.

“I am in no hurry, our Military is rebuilt, new, and ready to go, by far the best in the world. Sanctions are biting & more added last night. Iran can NEVER have Nuclear Weapons, not against the USA, and not against the WORLD!” he said.

In a series of tweets, Mr Trump also hit out at the Iran nuclear deal signed by then president Barack Obama in 2015, claiming that Iran was a “much weakened nation today than at the beginning of my Presidency, when they were causing major problems throughout the Middle East. Now they are Bust!”

Mr Trump’s comments on Twitter confirmed reports that the US president ordered military strikes against Iran in retaliation for the shooting-down of a US naval surveillance drone 24 hours earlier, but ultimately called off the mission. The decision was made by the White House to target specific bases in dawn attacks.

Iranian officials said the United States had warned Iran through Oman that an attack was imminent.

....Death to America. I terminated deal, which was not even ratified by Congress, and imposed strong sanctions. They are a much weakened nation today than at the beginning of my Presidency, when they were causing major problems throughout the Middle East. Now they are Bust!....

....proportionate to shooting down an unmanned drone. I am in no hurry, our Military is rebuilt, new, and ready to go, by far the best in the world. Sanctions are biting & more added last night. Iran can NEVER have Nuclear Weapons, not against the USA, and not against the WORLD!

But Mr Trump ultimately decided to abort the mission, after aircraft and personnel had already been engaged. The New York Times was the first to report the story.

The Federal Aviation Authority issued a warning overnight prohibiting US-registered aircraft flying over areas of Iran. Several US and international carriers including Qantas, British Airways and Malaysian Airlines also announced they were rerouting their flights to avoid the area.

In a further development, Iran also claimed that it refrained from shooting-down a US plane carrying 35 people which was flying alongside the unmanned drone that was shot down. Iran’s Tasnim news agency quoted Amirali Hajizadeh, head of the Revolutionary Guards aerospace division, as saying “this plane also entered our airspace and we could have shot it down, but we did not”.

Speculation had mounted throughout Thursday that the United States could be considering military action against Iran following the shooting-down of the RQ-4A Global Hawk by the Islamic Revolutionary Guards Corp (IRGC).

The $140 million drone, the size of an aircraft, is one of the most sophisticated in the US military’s arsenal. It was operating at a high altitude about 34km from the nearest point of land on the Iranian coast, before it was hit and fell into international waters, US Central Command said. The Pentagon dismissed accusations from Tehran that is was operating in Iranian air space.

“This was an unprovoked attack that had not violated Iranian air space at any time,” Lieut Gen Joseph Guastella said.

But the incident marked a significant escalation in tensions between the two powers which has been building since the United States pulled out of the Iran nuclear deal in May 2018.

International players and members of Congress urged caution as the situation appeared to escalate. The European Union, which has been trying to keep the Iran deal operating since the United States’ withdrawal from the accord, urged restraint to “make sure than an escalation is avoided”.

House speaker Nancy Pelosi confirmed that she had not been informed in advance of the planned military strikes. In a statement, Ms Pelosi said the United States was “in an extremely dangerous and sensitive situation with Iran”, and said measures against Iran should not be initiated without the approval of Congress.

Under its deal with world powers signed in 2015, Iran agreed to curbs on its nuclear activities in return for an easing of economic sanctions. The deal was seen as Mr Obama’s signature foreign policy achievement, but the US withdrew from the agreement last year.