US planned strikes against Iran before approval was withdrawn 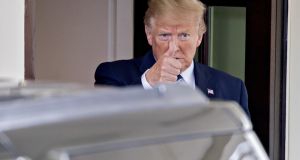 US president Donald Trump gives a thumbs up after a meeting with Canadian prime minister Justin Trudeau on Thursday. Photograph: Bloomberg

A US official said the military made preparations for limited strikes on Iran in retaliation for the downing of a US surveillance drone, but approval was abruptly withdrawn before the attacks were launched.

The official said the targets would have included radars and missile batteries.

The New York Times reported that US president Donald Trump had approved the strikes, but then called them off.

The White House on Thursday night declined requests for information about whether Mr Trump changed his mind.

According to the official who spoke to the Associated Press, the strikes were recommended by the Pentagon and were among the options presented to senior administration officials.

It was unclear how far the preparations had gone, but no shots were fired or missiles launched.

The military operation was called off around 7.30pm Washington time, after Mr Trump had spent most of Thursday discussing Iran strategy with top national security advisers and congressional leaders.

Asked earlier in the day about a US response to the attack, he said, “You’ll soon find out.”

Mr Trump declared that “Iran made a very big mistake” by shooting down the US drone over the Strait of Hormuz.

But he also suggested that shooting down the drone was a foolish error rather than an intentional escalation of the tensions that have led to rising fears of open military conflict.

“I find it hard to believe it was intentional, if you want to know the truth,” Mr Trump said at the White House. “I think that it could have been somebody who was loose and stupid that did it.”

On Capitol Hill, leaders urged caution to avoid escalation, and some politicians insisted the White House must consult with Congress before taking any actions.

US secretary of state Mike Pompeo and national security adviser John Bolton have advocated hardline policies against Iran, but Adam Schiff, the chairman of the House intelligence committee, said “the president certainly was listening” when congressional leaders at the meeting urged him to be cautious and not escalate the already tense situation.

House speaker Nancy Pelosi said no specific options for a US response were presented at the more than hour-long meeting.

Senate majority leader Mitch McConnell said, “The administration is engaged in what I would call measured responses.”

And late on Thursday, House Republicans on the Foreign Affairs, Intelligence and Armed Services committees issued a statement using the same word, saying, “There must be a measured response to these actions.”

The downing of the huge, unmanned aircraft , which Iran portrayed as a deliberate defence of its territory rather than a mistake, was a stark reminder of the risk of military conflict between US and Iranian forces as the Trump administration combines a “maximum pressure” campaign of economic sanctions with a build-up of American forces in the region.

On Thursday, Iran called the sanctions “economic terrorism”, insisted the drone had invaded its airspace and said it was taking its case to the United Nations in an effort to prove the US was lying about the aircraft being over international waters.

It accused the US of “a very dangerous and provocative act”.

The drone — which has a wingspan wider than a Boeing 737 — entered Iranian airspace “despite repeated radio warnings” and was shot down by Iran, acting under the UN Charter which allows self-defence action “if an armed attack occurs,” Iran’s UN ambassador Majid Takht Ravanchi said in a letter to the UN secretary-general.

Late on Thursday, the Federal Aviation Administration barred American-registered aircraft from flying over parts of the Persian Gulf and the Gulf of Oman. – AP

1 Mary Lou has to call for the smelling salts as SF councillor deals a knock-out blow
2 Dublin gangland figures involved in Drogheda feud that killed 17-year-old
3 Who was murdered teenager Keane Mulready-Woods?
4 Murdered and mutilated: Keane Mulready-Woods and the teenagers of gangland
5 Teenage boys and organised crime gangs: A complicated dynamic
Real news has value SUBSCRIBE