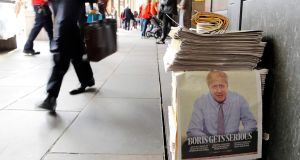 In Jeremy Hunt, Boris Johnson will face his ideal opponent in the final stage of the Conservative leadership contest, which will be decided by up to 160,000 party members.

A former Remainer who has shifted positions on Brexit almost weekly, the mild-mannered Hunt has little of the charisma and chutzpah that has made Johnson so popular among the Conservative membership.

The movement of votes between the three final ballots was so curious that few at Westminster doubt that Johnson’s supporters voted tactically to ensure that Hunt emerged in second place at the end. Few of Rory Stewart’s 27 backers on Wednesday evening were likely to switch to Johnson, but Johnson’s vote rose by 14 votes to 157 in the first ballot on Thursday.

This reinforced a suspicion that Johnson’s team had lent votes to Sajid Javid on Wednesday to knock out Stewart. Four of Javid’s supporters said publicly on Thursday afternoon that they were moving to Johnson, and others were expected to do so. But in the final ballot, Johnson’s vote increased by just three, while Hunt gained 18 to move ahead of Michael Gove by just two votes.

Some Conservative MPs feared that a contest between Johnson and Gove would turn into a venomous psychodrama because of Gove’s betrayal of Johnson in the 2016 leadership race.

Gove, who was a Brexiteer long before Johnson, would also have been more intellectually challenging for the frontrunner, pressing him on the details of his plan for Brexit.

The two remaining candidates will face party members in 16 hustings around the country over the next four weeks, and Hunt’s team insists that its candidate should not be written off. He will unveil detailed policy proposals within days, and his calm, quiet demeanour will appeal to some traditional Conservatives.

Johnson, who has stayed away as much as possible from debates and broadcast interviews until now, could suffer under the glare of relentless exposure during the campaign. The party membership will probably be forgiving of his gaffes and of any further revelations about his private life, but he will struggle to reconcile the mixed messages he has been sending to different wings of the party at Westminster.

Johnson remains, however, the prohibitive favourite to become Britain’s next prime minister, and governments across Europe are already preparing for a sharp change of tone from London and months of turbulence ahead.