Iran’s attack on US drone was ‘big mistake’, says Trump 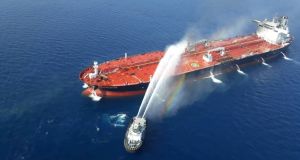 An Iranian navy boat tackles a fire on an oil tanker after it was attacked in the Gulf of Oman on June 13th. Photograph: Reuters

US president Donald Trump has warned Iran that the shooting-down of a US surveillance drone in the Persian Gulf region was a “big mistake” but said that the attack may not have been intentional.

Speaking in the Oval Office on Thursday as he met Canadian prime minister Justin Trudeau, Mr Trump said that he found it hard to believe the attack overnight on Wednesday was intentional.

“I have a feeling that it was a mistake made by somebody who shouldn’t have been doing what they did,” he said. “We didn’t have a man of woman in the drone . . . It would have made a big, big difference.”

He declined to specify what America’s response might be. “You’ll see,” he said. “Let’s see what happens.”

But he warned that “the country will not stand for it”.

His comments came as senior congressional leaders were summoned to the White House for briefings on Iran. The development marked a new front in the escalating standoff between Washington and Tehran.

Iran’s Revolutionary Guard Corps (IRGC) confirmed it targeted the drone, claiming it was inside Iranian air space over the southern province of Hormozgan. But this was disputed by US Central Command.

“The US was flying over the Gulf of Oman in international air space . . . when it was shot down by an IRGC surface to air missile,” Lieut Gen Joseph Guastella said during a specially-convened press briefing on Thursday. “This was an unprovoked attack that had not violated Iranian air space at any time,” he said.

The aircraft was operating at a high altitude about 34km from the nearest point of land on the Iranian coast before it was hit, and fell into international waters, he said. Officials confirmed it was a RQ-4A Global Hawk – one of the United States’s most sophisticated and costly drones.

It marks the second time a US drone had been shot down in the region in recent weeks after US officials accused Houthi forces allied with Iran of shooting down an MQ-9 Reaper drone on June 6th in Yemen.

Tensions between Washington and Tehran have escalated in recent weeks. The White House has blamed Iran for an attack on two oil ships last week, releasing video footage of what it claimed was an Iranian Revolutionary Guards boat pulling up beside a stricken oil tanker and removing a mine.

In response, Iran said it would increase its stockpile of uranium in breach of the 2015 Iran nuclear deal and hinted that it could increase enrichment levels to 20 per cent, a move that would bring it closer to having the capability to create a nuclear bomb.

The drone attack is the latest in a series of incidents that have ratcheted-up tensions in the Persian gulf region. Four ships, two of them owned by Saudi Arabia, were attacked last month off the coast of the United Arab Emirates. That prompted the United States to move an aircraft carrier and B-52 bombers to the region, with US national security adviser John Bolton directly blaming Iran for the attack.

The relationship between Iran and the US has deteriorated since Mr Trump’s election, with the US president making good on his campaign promise to take the country out of the nuclear deal. Since then, however, there have been mixed messages from the administration about how to handle the Iranian threat.

Mr Trump has pushed back against suggestions that the US is moving closer to some form of intervention and wants regime change – something Mr Bolton previously advocated. But last year he warned Iran that it would “suffer consequences the like of which few throughout history have ever suffered before” if it threatened the US.