Xi urges renewed talks between US and North Korea 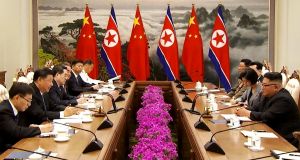 The world hopes North Korea and the US can talk to each other and for those talks to be successful, Chinese president Xi Jinping told North Korean leader Kim Jong-un on Thursday.

Mr Xi is visiting North Korea, seeking to bolster a longtime ally hit by UN sanctions over its nuclear and missile programmes, a week before Mr Xi and US president Donald Trump meet amid a bitter trade dispute.

Mr Xi, whose entourage includes the head of China’s state economic planner, will be in North Korea for two days, the first Chinese leader to visit in 14 years, and could bring fresh support measures for its floundering, sanctions-bound economy.

Mr Kim and his wife, Ri Sol-ju, greeted Mr Xi at the airport, Chinese state TV said. Mr Kim’s sister, Kim Yo-jong, and officials who played prominent roles in recent nuclear talks with the US were also on hand.

Mr Xi was driven through Pyongyang in a convertible car, standing with Mr Kim at his side, and greeted warmly by massed, cheering crowds on his way to the Kumsusan Palace of the Sun, a complex that serves as the mausoleum for North Korea’s founder, Kim Il-sung, the report said.

Mr Xi told Mr Kim he had come to consolidate a traditional friendship and to promote the political process for a resolution of the Korean peninsula issue, it added.

“The situation on the Korean peninsula concerns regional peace and stability,” the report paraphrased Mr Xi as telling Mr Kim at their formal meeting.

“The international community hopes that North Korea and the United States can talk and for the talks to get results.”

Since a failed summit between Mr Trump and Mr Kim in Hanoi earlier this year, Pyongyang has resumed some weapons tests and warned of “truly undesired consequences” if the US is not more flexible.

China is willing to provide what help it can to resolve North Korea’s reasonable security and development concerns, Mr Xi said.

Mr Kim told Mr Xi that in the last year or so North Korea had taken many positive steps to avoid tensions.

“But these didn’t get a positive response from the relevant side. This is not something North Korea wished to see,” Chinese television cited Mr Kim as saying.

“North Korea is willing to exercise patience, and at the same time hopes the relevant side can meet North Korea halfway, seek a solution that accords with both sides’ reasonable concerns, and promote results for the talks process of the peninsula issue.”

China is North Korea’s only major ally and the visit comes amid renewed tension on the Korean peninsula as the US seeks to persuade Pyongyang to give up its nuclear weapons, which it pursued for years in defiance of UN Security Council resolutions.

The trip is also an assertion of a key leverage point that China has in its deteriorating relationship with the US, diplomats say.

“Comrade Xi Jinping is visiting . . . in the face of crucial and grave tasks due to complex international relations, which clearly shows the Chinese party and the government place high significance on the friendship,” the North’s official Rodong Sinmun newspaper said.

The trip highlights two-way ties that “never waver despite any headwinds,” and strengthens “blood ties” between the two peoples, it added in a front page commentary.

Mr Xi is also expected to pay tribute at the Friendship Tower, which commemorates Chinese troops who fought together with North Koreans during the 1950-53 Korean War, which ended in a truce.

Mr Xi and Mr Kim will meet just a week before a G20 summit in Osaka where Mr Xi and Mr Trump are due to meet in a bid to reset ties poisoned by a bitter trade dispute.

While China has signed up to UN sanctions for the North’s repeated nuclear and missile tests, saying it is enforcing them fully, despite some US doubts, it has also suggested sanctions relief.