Boris Johnson and Jeremy Hunt: The two Tories fighting it out to be PM 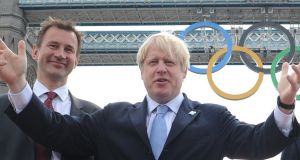 Jeremy Hunt with Boris Johnson in London ahead of the 2012 Olympics. The pair are the final two contenders for the Conservative Party leadership. File photograph: Stefan Rousseau/PA Wire

Boris Johnson, who turned 55 on Wednesday, has been one of Britain’s most prominent and colourful politicians for two decades, during much of which he has been tipped as a future prime minister. Born in New York to British parents, he won scholarships to Eton and Balliol College in Oxford and first came to public attention as a journalist.

As the Daily Telegraph’s Brussels correspondent from 1989 to 1994, he fuelled Conservative antipathy towards the EU with lurid and sometimes inaccurate stories about the excesses and absurdities of the European institutions. He became Conservative MP for Henley in 2001, leaving parliament in 2008 to run successfully against Ken Livingstone for the London mayoralty.

In his two terms as mayor, he improved the city’s public transport system and oversaw the 2012 Olympic Games but he faced criticism for his slow response to riots in 2011 and championed a number of unsuccessful infrastructure projects including “garden bridge” over the Thames and a new airport outside the city.

Returning to parliament in 2016, Johnson hesitated before joining the Leave campaign in the EU referendum but quickly became its most important figure. Theresa May appointed him foreign secretary but his tenure was marked by controversy and gaffes up to his resignation in July 2018 in protest against the Chequers plan for Brexit.

Foreign secretary Jeremy Hunt (52) is the richest member of the British cabinet, with an estimated net worth of £15 million (€16.9m), mostly due to a successful educational services company which he sold two years ago. The son of a senior naval officer, Hunt was educated at Charterhouse and at Magdalen College Oxford, where he studied Philosophy, Politics and Economics.

After two years as an English language teacher in Japan, Hunt started a succession of businesses, including a public relations firm and a company that offers a guide to educational courses worldwide. Conservative MP for South West Surrey since 2005, he was culture secretary from 2010 to 2012, when he became embroiled in controversy over his private communications with Rupert Murdoch’s son James during News Corporation’s attempted takeover of BSkyB.

As health secretary from 2012 to 2016, Hunt was in almost permanent conflict with National Health Service staff over pay, targets and resources. Junior doctors went on strike in 2015 and 2016 in protest against a new contract that increased working hours with little extra pay.

Hunt campaigned to remain in the EU in the 2016 referendum but later said he would vote for Brexit in a second referendum and he has refused to rule out leaving the EU without a deal.