Few things interest politicians more than jobs for politicians but is that all this is about? 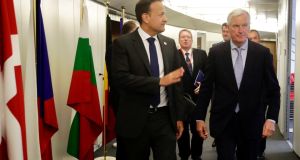 An intensive round of last-minute meetings is underway in Brussels before today’s EU summit in an attempt to strike a broad deal which would fill all the EU’s top jobs for the next five years.

Is it just about jobs?
Few things enliven politicians more than the prospect of new jobs for politicians; few things interest the public less. But it is the main business of this summit and it is vital for the future of the EU.

Who leads the EU institutions, and how they do it, has a significant bearing on not just what the EU does, but how it is perceived by its citizens. If this summit is primarily about EU housekeeping it’s no less important for that.

So despite expectations that no deal on the jobs would be possible, a flurry of meetings are taking place this morning in advance of the real horse-trading at the summit-proper later.

The heads of the European Parliament’s groups are meeting this morning and are due to publish a political programme for the next parliamentary term. More significantly, a meeting of the “co-ordinators” of the three big groups – the liberals, the socialists and the Christian Democrats – is specifically addressing the question of the top jobs.

The prime ministers of the liberals – now called “Renew Europe” and incorporating French president Emmanuel Macron’s MEPs – are also meeting, while the socialist group and the EPP will have their usual pre-summit meetings a little later.

The President of the European Council Donald Tusk – who, as chairman of the group of heads of government convenes these summits and controls the agenda –  is also engaging in a last-minute round of contacts with EU leaders. He wants a decision as soon as possible, and diplomats have speculated that if no deal is reached this evening, leaders could return for a special summit next week in order to finalise the slate of appointments before the new European Parliament meets on July 2nd. Some Brussels sources say that the process could drag on into July; it all depends on the approach the leaders take this evening.

How is it going to play out?
The summit will demonstrate how power has shifted dramatically in the European institutions since the last summit. The EPP, which has held all the top jobs in the last term, no longer dominates either the parliament or the council. Its great champion, Angela Merkel, is in the last phase of her career and her influence is waning. How that power moves, and to whose advantage, is the great undercurrent of this summit.

What jobs are to be filled?
The most important is the presidency of the European Commission, replacing Jean-Claude Juncker who retires when the current commission’s term expires in October.

Under a convention applied last time (but not before that) the main groups in the European Parliament propose a lead candidate – or “spitzenkandidat” – before the Parliament elections, and whoever gets the most votes is then nominated by the Council, and approved by the parliament.

That process is in trouble for two reasons: firstly, the EPP candidate Manfred Weber is not viewed by many of the leaders (particularly Macron), who has made his opposition blunt) as a candidate of sufficient standing for the Commission job. It’s traditionally the preserve of former prime ministers (as Juncker was), and the prime ministers on the European Council are unsurprisingly in favour of appointing former prime ministers to these important roles.

Secondly, while the EPP is the largest group, it would be a stretch to say that it “won” the European Parliament elections, and the other groups have said that they will block his ratification. In other words, as things stand, he doesn’t have the votes.

But nor do the other “spitzenkandidaten” – the Dutch socialist Franz Timmermans and the Danish liberal Margrethe Vestager. So various names have been touted as compromises, including the Brexit negotiator Michel Barnier, who is meeting the Taoiseach this morning.

What are the other jobs?
Whoever is selected for the Commission job, it will be part of a package that also sees the next head of the Council (Tusk’s job), the next ECB President – hugely important, though less political – to succeed Mario Draghi, the next President of the European Parliament (high profile in Brussels, but not that important) and the EU’s High Representative for Foreign Affairs (a second-tier job).

It is all about jobs then?
Ah no. The leaders will also discuss climate change, the EU’s strategic agenda for the next five years, international affairs and the next EU budget. Tomorrow there will be a discussion on Brexit, ever the Irish priority. EU leaders will be delighted not to have a summit dominated by the question of the UK’s exit, for once. But all are aware of the inexorable progress of Boris Johnson towards Downing St, and what he has been saying to get there. The impending Brexit meltdown in the autumn – when Johnson will come looking for a new deal as the clock ticks down to Brexit day at the end of October – is another reason to agree on the jobs and present a united front.