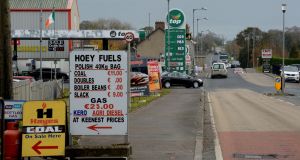 The European Commission has strongly emphasised the need to preserve a frictionless border in Ireland if longstanding and extensive North-South co-operation is to be sustained.

In a working paper published on Thursday, the commission sets an exercise conducted with the British last year in “mapping” 147 North-South projects and programmes in the context of obligations on the UK to protect the Northern Ireland peace process under the 1998 Belfast Agreement.

The UK parliamentary Brexit committee published the British government’s own report on the mapping exercise on Thursday but without the same political emphasis in the commission’s version, which stressed the importance of maintaining an open border to sustain North-South co-operation.

The UK government published a 12-page “technical explanatory note” on the North-South co-operation mapping exercise in December, but had refused to publish the documents in the exercise, which run to more than 60 pages, until the report was provided to the Westminster committee.

The parliamentary panel said the document was provided to the committee following a disclosure from the UK cabinet office to a Freedom of Information request from a member of the public.

The mapping exercise report was never shared with the Brexit committee despite repeated requests from its chairman, Labour MP Hilary Benn.

The UK document on the exercise, carried out in September 2017, specifies 142 areas of joint North-South co-operation, ranging in areas of healthcare from congenital heart disease to alcohol misuse to rules covering the transport of firearms, civil explosives and “national treasures”.

The 2017 study formed the basis of the joint political declaration in December of that year and later the withdrawal agreement, including the backstop insurance policy to prevent a hard Irish border.

The UK government committed to sustaining cross-Border projects under the terms of the 1998 agreement. A British government spokesman insisted it remained committed to upholding the peace agreement “in all scenarios” around the UK’s exit from the EU.

“It was consistently recognised that virtually all areas of North-South co-operation are predicated on the avoidance of a hard border, including related customs or regulatory checks and controls,” the European Commission’s report says.

In detailing areas of co-operation ranging from animal and plant standards to cross-Border healthcare and environmental protection, the report warns that a hard border threatens the viability of such projects.

Taoiseach Leo Varadkar said in Brussels he was glad the mapping exercise report had been published.

“It really sketches out the very large number of areas where there is North-South co-operation, co-operation between Northern Ireland and Ireland,” he said.

Mr Varadkar said that North-South co-operation runs “so much deeper than trade issues – it applies to so many other things”.

“[It] really sketches out what the Good Friday [Belfast] Agreement is all about, which is powersharing in the North and increased co-operation north-south and east-west,” he said.

“So when we talk about avoiding a hard border and also protecting the Good Friday Agreement, they are not the same thing. It is both of those things that we seek to protect.”

The commission’s report strengthens Dublin’s argument that the UK’s obligation to the backstop – the contentious part of the withdrawal agreement that has caused the House of Commons to reject the proposed Brexit treaty three times – predates the backstop to the Belfast Agreement.

The reports show that cross-Border co-operation extends beyond trade and customs, which were the focus of “soft border” technological solutions proposed by pro-Brexit UK politicians but ultimately rejected by the European Union in negotiations.