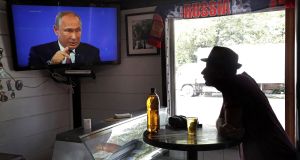 As Vladimir Putin embarked on his annual press conference on Thursday, news emerged that preparations were under way in the Russian far-east for the release of some 100 illegally captured whales, whose year-long incarceration has stirred environmental protests.

The Russian president has been facing falling approval ratings as his people, worn down by four years of declining living standards, question his ability to bring about positive change. Videos of the soon-to-be-freed whales beamed into the Moscow studio where Putin was fielding questions, injecting the sense that even tricky problems could be solved.

Putin had prepared for two days for his annual Direct Line question and answer conference where people from across Russia can phone in to raise pressing concerns. It’s a marathon event – Thursday’s conference lasted more than four hours – carefully choreographed by the Kremlin to demonstrate that Putin holds all the levers of power. “It’s one thing when a minister says something, and another when I say it,” the Russian president said.

Many questions focused on Russians’ daily struggles, the long waiting lists at rural clinics, housing shortages and the breakdown in rubbish collection services. “When will life get a bit better, even a little bit?” asked a firemen who supports a family of four in Russia’s Vladimir region on a monthly salary of Rbs 10,000 (€140).

Putin admitted that Russia faced huge problems and that the gap between rich and poor was too wide. But he reassured the audience, said that the National Projects – a $400 billion infrastructure investment programme launched after he was elected to a fourth presidential term last year – would modernise Russia’s economy and bring about a breakthrough to improve people’s lives.

For much of the conference Putin presented himself as a kind tsar, pledging higher maternity benefits and pensions. As is customary at the Direct Line, he promised to intervene in individual cases – like the large Ukrainian family who fled the separatist conflict in Donbass for Russia in 2014 but has failed to overcome bureaucratic hurdles to obtain Russian citizenship.

However, when pressed on Russia’s increasingly repressive legislation, Putin showed his tough, authoritarian side. There could be no easing of the tough prison sentences handed to drug offenders, and a new law against insulting the authorities that has seen 13 people fined for mocking the president in the past two months would not be changed.

Foreign affairs got less of a hearing. Putin dismissed accusations that Russia was occupying Ukraine’s Donbass as “bullshit and a lie”, and made short work of a question on whether Russia could possibly mend relations with the West. “We have not argued with anyone. And we have no desire to argue,” he said. Russia would never trade its national interests to secure a big conciliation deal with foreign powers.

Western countries were paying a high price for imposing sanctions on Russia that have shut them out of a huge market. And although painful for Russia, the sanctions were making the country “stronger” by forcing the pace of import substitution.

Putin often uses the Direct Line to slam US policies but on Thursday he avoided confrontational statements, stressing that Russia was ready for dialogue.

However, he warned that the US would be making a dangerous mistake if it embarked on war with Iran that could have “catastrophic” consequences for the region and possibly beyond.

The Direct Line would not be the Direct Line without some personal questions for the Russian president. Putin reassured one caller that he was not an “alien from another planet”, and another that he had not tired of leading the nation.

His one regret was to have lost a note handed to him by a woman who dropped to her knees as he passed by in a rainy street in 2000, the first year of his presidency. “I will never forget that. I am ashamed even now,” he said.