Every time the positions are to be allocated, politicians raise the credentials 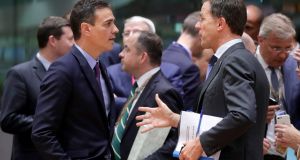 “We are going to witness a very dynamic 24 hours”, a senior EU official warned journalists on Wednesday night of the attempts by EU leaders to agree who will next lead the European Commission and the Council, and take the job of High Representative for Foreign Policy. There’s also the presidency of the European Central Bank, and the parliament’s own presidency – in the gift of MEPs – is regarded as part of the delicate mix.

He was right. A frenzy of networking as parties and leaders met to test out bewildering permutations of job allocations . . . But no result. Last night’s inconclusive dinner was perhaps the inevitable result of expectations that the irreconcilable could be reconciled.

Ten days may persuade a few of them to detach themselves from candidates who can’t possibly win.

So another summit is planned for July 1st.

This happens every time the top jobs divvy-up happens. But it would seem that every time EU politicians make squaring the circle more difficult by upping the credentials required.

This time, on top of the usual challenges – to fairly represent the big parties and different parts of the union, and to reconcile leaders with MEPs’ ambitions for their own candidates – there is an extra party in the mix as a result of European elections which broke the hegemony of the centre-right and centre-left.

Now the liberals, renamed Renew Europe, want a place at the table, and they have a few PMs to fight their corner.

And there has been a resolute commitment from President of the Council Donald Tusk, backed yesterday by France’s Emmanuel Macron, to gender balance. Not just one woman at the table, but two, at least.

There are lists circulating. Lithuanian president Dalia Grybauskaité, World Bank chief executive Kristalina Georgieva as well as Croatian president Kolinda Grabar-Kitarovic are “credible” candidates and “options for one or many of these [top EU] positions,” according to an Élysée official.

And there’s Danish Competition Commissioner Margrethe Vestager, the candidate of Renew Europe, while the name of IMF head Christine Lagarde was also being mentioned last night.

To complicate the calculations new political dynamics from the European elections are changing the landscape and the dramatis personae: the emergence of Spanish Socialists as key players in parliament at the same time as the German socialists have been eclipsed.

The liberals have been reshaped into Renew Europe with the entry of a large group of Macron supporters. The changes have brought new names for the top jobs to the fore, not least Spain’s Josep Borrell, who was in no one’s calculations until the past few weeks.

Not to mention an interinstitutional row with the parliament, which is insisting that leaders nominate its commission candidate so that, in accordance with the treaty, it can then elect him or her. And some of the leaders are determined to further restrict the pool of potential appointees by reserving the jobs for former prime ministers, already a requirement for the Council presidency.

What is required is a deep well of compromise, a tradition of patient coalition building in which some of our partners. “What’s the problem?” says a Dutch diplomat. “We do it all the time at home.”