Trump says he was ‘not happy’ about ‘send her back’ chants

US president responds to outcry over his campaign rally, as Ilhan Omar calls him a ‘fascist’

Members of the audience at a Donald Trump rally in North Carolina chant "send her back" as the US president intensifies his attack on Somali-born Democratic congresswoman Ilhan Omar. Video: C-Span 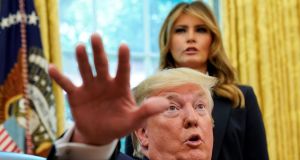 US president Donald Trump tried on Thursday to distance himself from chants of “send her back” that rippled through his campaign rally in North Carolina on Wednesday, after the president attacked Democratic congresswoman Ilhan Omar during his speech at the event.

Addressing thousands of supporters at a “Make America Great Again” rally in Greensville, North Carolina, Mr Trump ramped up his criticism of four congresswomen whom he controversially ordered to “go back” to the “totally broken and crime-infested places from which they came” in a weekend tweet.

“These congresswomen are helping the rise of a militant, hard left,” the president said. “They never have anything good to say, which is why I say: ‘If they don’t like it, let them leave’ . . . They don’t love our country and in some cases I think they hate our country.”

But it was Ms Omar, a Somali-born member of Congress who moved to the US when she was 12, who was the main focus of his attack.

“Omar looks down with contempt on the hard-working Americans, saying that ignorance is pervasive in many parts of this country,” he said, adding that she has a history of “vicious anti-Semitic” comments.

His claims prompted cries of “send her back, send her back” from the crowd, a play on Mr Trump’s 2016 campaign rally-cry “lock her up, lock her up”, a reference to his opponent Hillary Clinton.

Speaking in the White House on Thursday at an event for the Special Olympics – which was attended by chief executive Mary Davis – Mr Trump said: “I was not happy when I heard that chant.

“I felt a little bit badly about it . . . it started up rather fast . . . I was not happy with it . . . but again, I didn’t say that but they did.” Asked by a reporter why he didn’t intervene to stop the chanting, he said that he tried to do so by beginning to talk quickly.

His attempt to disavow the chant came amid reports that several Republicans had raised concerns about the incident during a breakfast meeting with vice-president Mike Pence.

Vice-chairman of the Republican caucus on Capitol Hill Mark Walker, who is a former pastor and attended the rally in Greensville, was among those who voiced concerns. “We cannot be defined by this,” he said, but added: “Let’s focus on what’s been said and the actions of representative Omar.”

Others also tried to tread a delicate line, with House minority leader Kevin McCarthy stating that the chants had “no place in America”, while also defending Mr Trump, arguing that the chants were coming from “a small group of people off to the side”.

Florida senator Marco Rubio tweeted that the chant was “grotesque”, but added that the “left-wing politicians & many in the media demanding outrage are self-righteous hypocrites”.

Mr Trump’s language on Thursday contrasted with a tweet he sent after the rally in which he praised the great energy at the event. “What a crowd, and what great people,” he wrote.

Speaking at the US Capitol on Thursday in her first public comments since the rally, Ms Omar said that she believed the president was a “fascist”.

“We have said this president is racist. We have condemned his racist remarks,” said the congresswoman from Minnesota. “I believe he is fascist.”

Representative Alexandria Ocasio-Cortez, one of the four members of Congress targeted by Mr Trump in recent days, said that the president had put “millions of Americans” in danger.

“This is not just about threats to individual members of Congress, but it is about creating a volatile environment in this country through violent rhetoric that puts anyone, like Ilhan, anyone who believes in the rights of all people, in danger. And I think that he has a responsibility for that environment,” the New York congresswoman said.

Mr Trump namechecked Ms Ocasio-Cortez during his rally on Wednesday, pledging to call her “Cortez”, saying: “I don’t have time to go with three different names.”

Davy scandal: The who, what, where, when and why?

3 Girl left scarred after falling into brambles at school awarded €90,000