US politicians vote to condemn Trump comments as racist

Kellyanne Conway, an advisor to Donald Trump, has defended the US president over tweets he posted telling US congresswomen to go back to the countries "from which they came" by asking a journalist about their own ethnicity. Video: C-Span 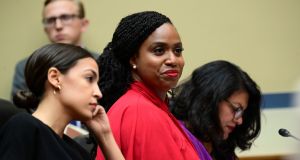 US Representatives Alexandria Ocasio-Cortez (L), Ayanna Pressley and Rashida Tlaib (R) are three of the four Congresswomen president Trump ‘go back’ to the ‘totally broken and crime infested places from which they came’. Photograph: Erin Scott/Reuters 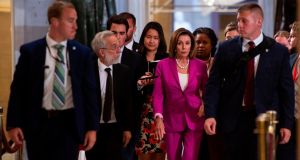 House Speaker Nancy Pelosi (Centre) brought the motion before the House to condemn the “racist comments that have legitimised fear and hatred of new Americans and people of colour”. Photograph: by Andrew Caballero-Reynolds/AFP/Getty Images

The US House of Representatives voted on Tuesday to condemn recent comments by Donald Trump as racist, following one of the most acrimonious debates on the House floor in recent memory. Four Republicans and one Independent voted with Democrats to endorse the motion brought to the floor by House Speaker Nancy Pelosi to condemn the “racist comments that have legitimised fear and hatred of new Americans and people of colour”.

It follows Mr Trump’s instruction to four non-white members of Congress to “go back” to the “totally broken and crime infested places from which they came” on Sunday, a stance that he has doubled-down on in recent days. His comments have prompted international condemnation, including from the leaders of Britain and Canada.

“These comments from the White House are disgraceful and disgusting, and the comments are racist,” Ms Pelosi said as she introduced the motion.

It passed by 240 votes to 187 in the Democratically-controlled chamber.

Earlier, Republicans tried to block the motion, arguing that the use of the word “racist” violated the chamber’s standards of decorum which forbids members of Congress from making disparaging comments about the president on the House floors.. Ultimately, Ms Pelosi was found to be out of order, but Democrats voted not to remove her comments from the record.

Speaking on the House floor, veteran African-American congressman John Lewis a central figure in the civil rights movement of the 1960s, condemned the language used by Donald Trump.

“I know racism when I see it. I know racism when I feel it. And at the highest level of government, there’s no room for racism,” he said in one of the final speeches of the evening. “The world is watching. They are shocked and dismayed because it seems we have lost our way as a nation.”

.....Congresswomen, who I truly believe, based on their actions, hate our Country. Get a list of the HORRIBLE things they have said. Omar is polling at 8%, Cortez at 21%. Nancy Pelosi tried to push them away, but now they are forever wedded to the Democrat Party. See you in 2020!

....visible members of the House Democrats, who are now wedded to this bitterness and hate. The Republican vote was 187-4. Wow! Also, this was the first time since 1984 that the Speaker of the House was ruled Out of Order and broke the Rules of the House. Quite a day!

But Kevin McCarthy, the top Republican in the House, called it a “sad day.” “Our rules of order and decency were broken today,” he said.

Following the vote, Texas congressman Al Green, a frequent critic of Mr Trump, filed articles of impeachment against the president, arguing that he has “brought the high office of the president of the United States into contempt, ridicule, disgrace and disrepute”.

Tuesday’s vote, which laid bare huge divisions between the two parties in the wake of Donald Trump’s controversial policies, took place as a new poll found that support for the US president has risen among some Republicans since Mr Trump’s weekend tweets.

The Reuters/Ipos poll, which was conducted on Monday and Tuesday this week, showed that the president’s net approval among members of his Republican Party rose by 5 percentage points to 72 per cent, compared with a similar poll last week.

Mr Trump had urged Republicans earlier in the day not to fall into a “trap” by voting for Tuesday’s Democratic-backed resolution, and reiterating that the women should leave America if they do not like the country.

“I don’t have a Racist bone in my body!” he tweeted in the hours leading up to the vote, intensifying his attacks on the four non-white female members of Congress.

“The Democrat Congresswomen have been spewing some of the most vile, hateful, and disgusting things ever said by a politician in the House or Senate, & yet they get a free pass and a big embrace from the Democrat Party,” he tweeted. “Why isn’t the House voting to rebuke the filthy and hate laced things they have said? Because they are the Radical Left, and the Democrats are afraid to take them on. Sad!”

Though Mr Trump did not name the four women explicitly, he has been targeting four recently-elected members of the House – New York representative Alexandria Ocasio-Cortez, Ilhan Omar of Minnesota, Massachusetts congresswoman Ayanna Pressley and Rashida Tlaib of Michigan.

Signs that the Republican Party would broadly stick with the president emerged earlier in the day, when Senate majority leader Mitch McConnell refused to label the President’s comments as racist, even as reporters pointed out that his wife, transport secretary Elaine Chao, emigrated to the United States from China.

“I think everybody ought to tone down their rhetoric,” he said at a press conference. “The president’s not a racist. And I think the tone of all of this is not good for the country. But it’s coming from all ideological points of view... to single out any segment of this I think is a mistake.”

He said that his own wife had come to the United State aged eight, legally, without a word of English and “realised the American dream.” “I am a big fan of legal immigration,” he said.

White House aide Kellyanne Conway also stoked controversy when she asked a reporter: “what is your ethnicity,” during an impromptu interchange with members of the media at the White House. Noting that her own ancestors were from Ireland and Italy, she said that the president was referring to the members of congress’ ancestry, not their country of birth, when he suggested they go back to the countries they came from.