Who are ‘The Squad’? The Democratic women who riled Trump

Four US congresswomen, who have collectively become knows as "The Squad", speak to CBS about Donald Trump and the Republican party, as well as the speaker of the US House of Representatives Nancy Pelosi. Video: Reuters 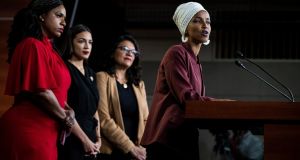 When US president Donald Trump wrote in a tweet on Sunday that “’progressive’ Democrat congresswomen” should “go back and help fix the totally broken and crime infested places from which they came”, he did not name the lawmakers in question.

But the comments were widely seen as an attack on four leftwing freshman Democrats known as “The Squad”: Alexandria Ocasio-Cortez, Rashida Tlaib, Ilhan Omar and Ayanna Pressley.

The women – all of whom are US citizens – have clashed repeatedly with Nancy Pelosi, speaker of the House of Representatives, in recent weeks over their outspoken criticism of fellow Democrats.

Alexandria Ocasio-Cortez (29) is the youngest woman ever to serve in the US Congress, having been elected in November to represent New York’s 14th District, which includes parts of Queens and the Bronx. A self-described democratic socialist, Ocasio-Cortez has effectively used her Twitter and Instagram accounts to make the case for progressive policies, including her flagship “Green New Deal” to cut greenhouse gas emissions.

Rashida Tlaib (42) became the first Palestinian-American woman elected to Congress and one of the first Muslim women elected to Congress when she won Michigan’s 13th District, which includes part of Detroit, last year. Like Ocasio-Cortez, Tlaib is a democratic socialist and supports policies such as a $15-per-hour (€13.40) minimum wage.

Ilhan Omar (37) is a former refugee from Somalia who moved to the US at the age of 12. Along with s Tlaib, she became one of the first two Muslim women elected to Congress when she won Minnesota’s 5th District, which includes Minneapolis and some of its suburbs, in November. Omar attracted controversy this year for comments that were widely seen as anti-Semitic. She later apologised, saying she had not intended to offend Jewish Americans.

Ayanna Pressley (45) represents Massachusetts’ 7th District, which includes parts of Boston. A longtime aide to Senator John Kerry, she was the first black woman elected to Boston’s city council and is now the first African-American woman to represent Massachusetts in the House of Representatives. She won her seat after challenging incumbent Democrat Mike Capuano, who had served two decades in the House, with strong support from younger voters. – Copyright The Financial Times Limited 2019