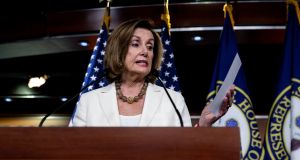 House speaker Nancy Pelosi: “These comments from the White House are disgraceful and disgusting and these comments are racist.” Photograph: Anna Moneymaker/New York Times

US president Donald Trump applauded Republicans for not backing a House of Representatives motion describing recent comments by him as “racist”, after only four members of his party joined Democrats in censuring him.

The House voted on Tuesday night to condemn Mr Trump, following uproar about his call in a weekend tweet for four non-white female members of the Democratic Party to “go back” to the “totally broken and crime-infested places from which they came”.

The motion to condemn the “racist comments that have legitimised fear and hatred of New Americans and people of colour” passed by 240 votes to 187, following one of the most acrimonious debates on the House floor in recent memory.

Four Republicans and one independent voted with the Democrats. “So great to see how unified the Republican Party was on today’s vote concerning statements I made about four Democrat Congresswomen,” Mr Trump tweeted shortly after the vote. “If you really want to see statements, look at the horrible things they said about our Country, Israel, and much more.”

Earlier, Republicans tried to block the motion, arguing that the use of the word “racist” violated the chamber’s standards of decorum, which forbid members of Congress from making disparaging comments about the president on the house floor.

During heated exchanges, House speaker Nancy Pelosi said “these comments from the White House are disgraceful and disgusting and these comments are racist”, adding: “Every single member of this institution, Democratic and Republican, should join us in condemning the president’s racist tweets.”

Ms Pelosi was found to be out of order and banned from speaking for the remainder of the session, but Democrats voted not to remove her comments from the record.

Speaking in the chamber, veteran African-American congressman John Lewis, a central figure in the civil rights movement of the 1960s, condemned the language used by Mr Trump.

“I know racism when I see it. I know racism when I feel it. And at the highest level of government, there’s no room for racism,” he said in one of the final speeches of the evening. “The world is watching. They are shocked and dismayed because it seems we have lost our way as a nation.”

But Kevin McCarthy, the top Republican in the House, called it a “sad day”. “Our rules of order and decency were broken today,” he said.

Though Mr Trump did not name the four women explicitly, he has been targeting four recently elected members of the House – New York representative Alexandria Ocasio-Cortez, Ilhan Omar of Minnesota, Ayanna Pressley of Massachusetts and Rashida Tlaib of Michigan.

Following the House vote, Texas congressman Al Green, a frequent critic of Mr Trump, filed articles of impeachment against the president, arguing that he had “brought the high office of the president of the United States into contempt, ridicule, disgrace and disrepute”.

Tuesday’s vote, which laid bare huge divisions between the two parties in the wake of Mr Trump’s controversial policies, took place as a new poll found that support for the US president has risen among some Republicans since his weekend tweets.

The Reuters/Ipos poll, which was conducted on Monday and Tuesday this week, showed the president’s net approval among members of his Republican party rose by 5 percentage points to 72 per cent, compared with a similar poll last week.

Mr Trump had urged Republicans earlier in the day not to fall into a “trap” by voting for Tuesday’s Democratic-backed resolution, and reiterating that the women should leave America if they do not like the country.

“I don’t have a Racist bone in my body!” he tweeted in the hours leading up to the vote, even as he intensified his attacks on the four non-white female members of Congress.

“The Democrat Congresswomen have been spewing some of the most vile, hateful, and disgusting things ever said by a politician in the House or Senate, & yet they get a free pass and a big embrace from the Democrat Party,” he tweeted. “Why isn’t the House voting to rebuke the filthy and hate-laced things they have said? Because they are the Radical Left, and the Democrats are afraid to take them on. Sad!”