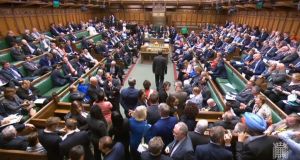 MPs convening for the announcement of voting on the ‘Benn Amendment’ calibrated to prevent the next prime minister from suspending parliament to pursue a no-deal Brexit. Photograph: via EPA

Boris Johnson’s prospects of leaving the European Union without a deal on October 31st narrowed on Thursday after MPs voted to prevent him suspending parliament to force through a no-deal Brexit.

Almost 50 Conservative MPs rebelled against a three-line whip to vote in favour of the amendment or to abstain, so that it was carried by a majority of 41.

The amendment to the Northern Ireland (Executive Formation) Bill obliges the government to report to parliament during September and October on progress towards restoring the Stormont institutions. MPs would be able to debate and vote on a motion after each report, so the government would not be able to prevent parliament from sitting.

“Everyone in the House is well aware that Brexit has significant implications for the country as a whole, but it will have particular implications for Northern Ireland,” said Labour’s Hilary Benn.

“This amendment has a secondary effect: to ensure that the House would be sitting at a crucial time for our country, as I believe the country would expect us to be. I do not think that we could accept circumstances, if I may coin the phrase, in which we were sent missing in action.”

Among the Conservatives who abstained were cabinet ministers Philip Hammond, David Gauke, Greg Clarke and Rory Stewart. Business minister Margot James resigned before voting in favour of the amendment.

What is the significance of this vote?

During the Conservative leadership campaign, Mr Johnson has declined to rule out suspending parliament to prevent MPs from blocking a no-deal Brexit. The amendment approved on Thursday makes it almost impossible for him to do so and although it does not in itself prevent a no-deal Brexit, the vote showed the extent of parliamentary opposition to it.

MPs voted overwhelmingly in favour of amendments extending same-sex marriage and abortion rights to Northern Ireland, with 328 in favour and 65 against. DUP deputy leader Nigel Dodds complained that MPs from other parties who took scant interest in Northern Ireland most of the time had hijacked the Bill to pursue issues of particular interest to them.

“On the fundamental change to the law on abortion in Northern Ireland, Roman Catholics and Protestants, Unionists and nationalists take a very different view from that of many people in this House, but they have been left to one side. Their views have not been, and are not going to be, listened to as a result of the procedures that have been set out,” he said.